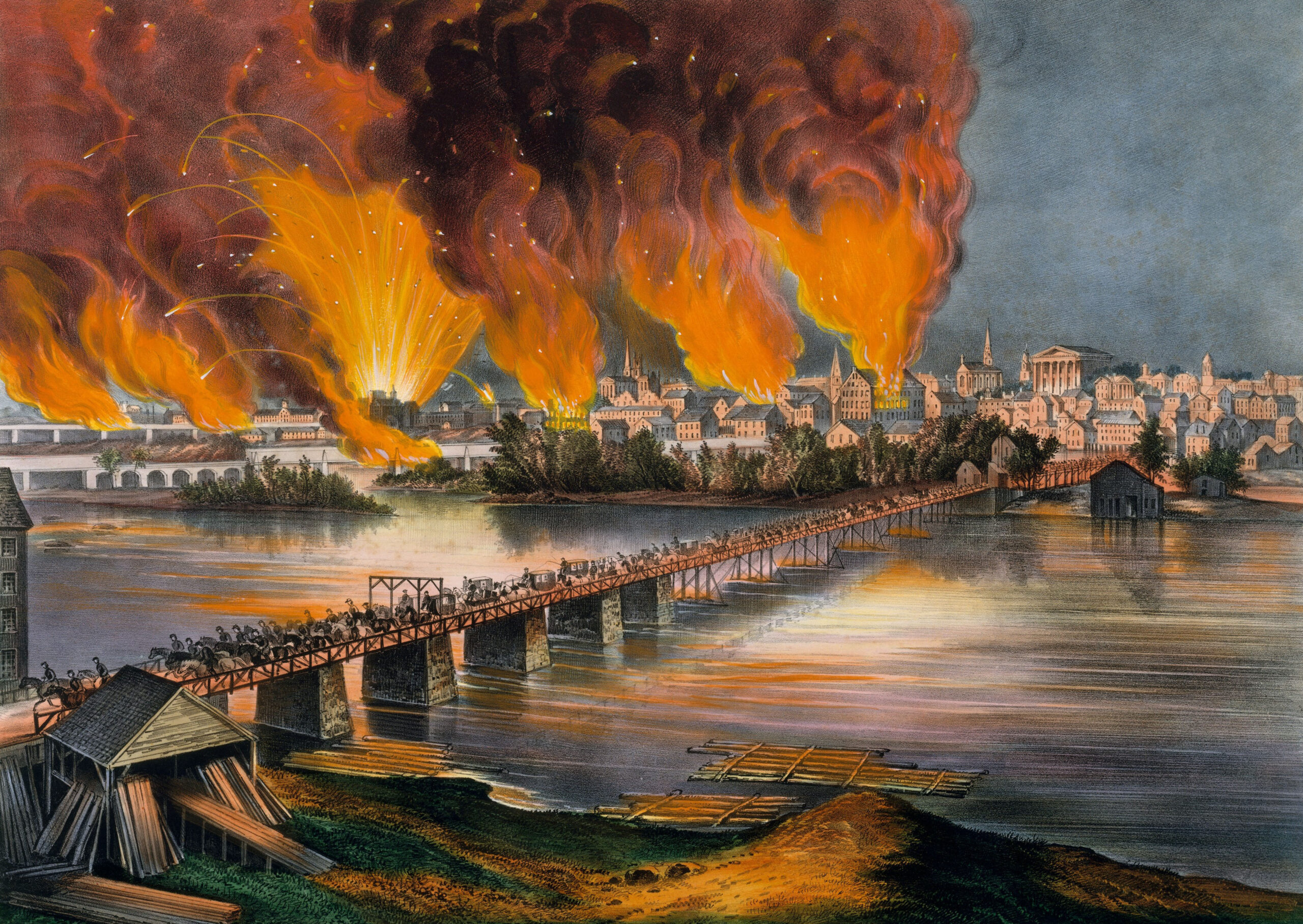 Richmond was capital of the Confederate States of America from May 1861 until April 1865. Elements of the major battlefields are maintained by the Richmond National Battlefield Park. Although part of the city burned when it was evacuated in 1865, many sites associated with the Civil War in Richmond survive and are open to the public. 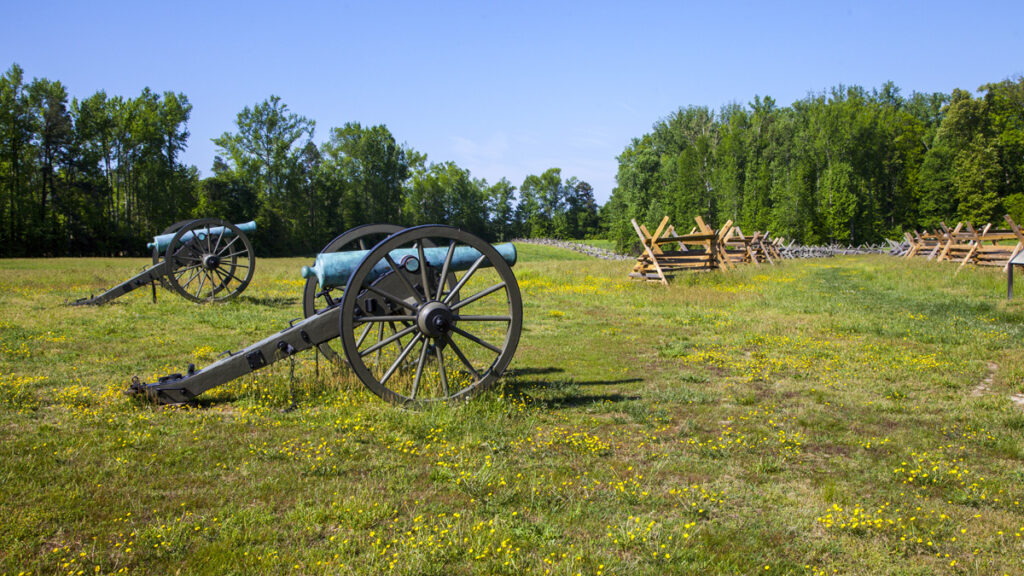 Main visitor center in the American Civil War Center at Historic Tredegar, near Fifth and Tredegar streets on the James Riverfront. 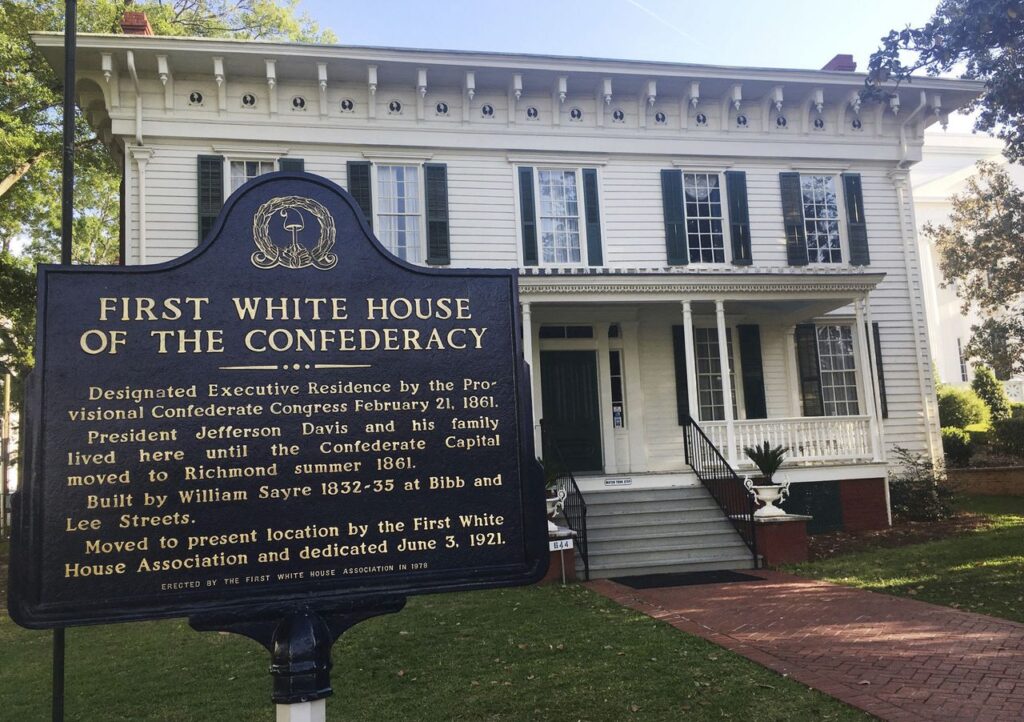 Museum and White House of the Confederacy, 12th and Clay streets – Lee’s Appomattox uniform, Stuart’s plumed hat, Armistead’s Gettysburg sword and countless other Civil War icons are exhibited here. Special sections highlight various aspects of soldier and civilian life in the Confederacy. The Confederate “White House,” home to Jefferson Davis and his family during the war, has been restored to its war-time appearance and is open for tours. Museum and White House closed Wednesdays. $11 adult admission includes museum and guided White House tour. 804-649-1861.

The American Civil War Center at Historic Tredegar, near Fifth and Tredegar Streets on the James Riverfront – This eight-acre site on the James River was at the heart of the Confederate manufacturing capacity. Two of the buildings once used by the famous Tredegar Iron Works are restored and open on the site.

The “In the Cause of Freedom” exhibit, located in the signature gun foundry building, covers the entire war from causes to consequences. Short films, interactive displays, maps and artifacts examine the perspectives of Union, Confederate and black participants. The exhibit is open 9 am-5 pm daily and costs $8 for adults (onsite parking fee reimbursed with paid admission). www.tredegar.org or 804-780-1865.

Also on the Tredegar site is main Richmond National Battlefield Park visitor center (see listing above). Admission to that building is free, but there is no reimbursement for onsite parking. There is free two-hour parking on Fifth Street and in a lot about a block beyond the Center on Tredegar Street, but availability is limited.

Virginia Historical Society, Boulevard and Kensington Avenue – Housed in what once was called the “Battle Abbey,” the modern Virginia Historical Society features exhibits relating to all of Virginia’s history. Civil War features include the murals “Four Seasons of the Confederacy” and items from the most extensive collection of Confederate-manufactured weapons. The cornerstone exhibit offers a Civil War section. Open 10 am-5 pm Monday-Saturday; 1-5 pm Sundays. $5 adults (Sundays free). 804-358-4901.

Hollywood Cemetery, entrance at Cherry and Albemarle streets – An estimated 18,000 Confederate soldiers, including Gens. George Pickett and J.E.B. Stuart, are buried here. Jefferson Davis and his family also are here overlooking the James River. Some of the most spectacular views in Richmond are found in this place, established in the 1840s. Open 8:30 am-4:30 pm. Free. For more information, call 804-648-8501.

Confederate Memorial Chapel, 2900 Grove Ave. (behind the Virginia Museum of Fine Arts) – This tiny building was once part of the Confederate old soldiers’ home. Much Confederate memorial material inside. Free admission, video and guided tours. Open Wednesday – Sunday 11 am – 3 pm.

Canal Walk, on the James Riverfront across Tredegar Street from the American Civil War Center – “Three Days in April 1865” exhibit located on a pedestrian walkway extending over the river uses quotations and images highlighting the evacuation and Union occupation of Richmond.

Virginia State Capitol – Main building, inspired by Thomas Jefferson, housed both the Confederate and Virginia legislatures during the war. Surrounding square is full of history with statues, the Governor’s Mansion and the old Bell Tower. The main building and grounds are undergoing a renovation and restoration that will take years. Grounds-only tours currently offered. Interior tours scheduled to resume May 2007. 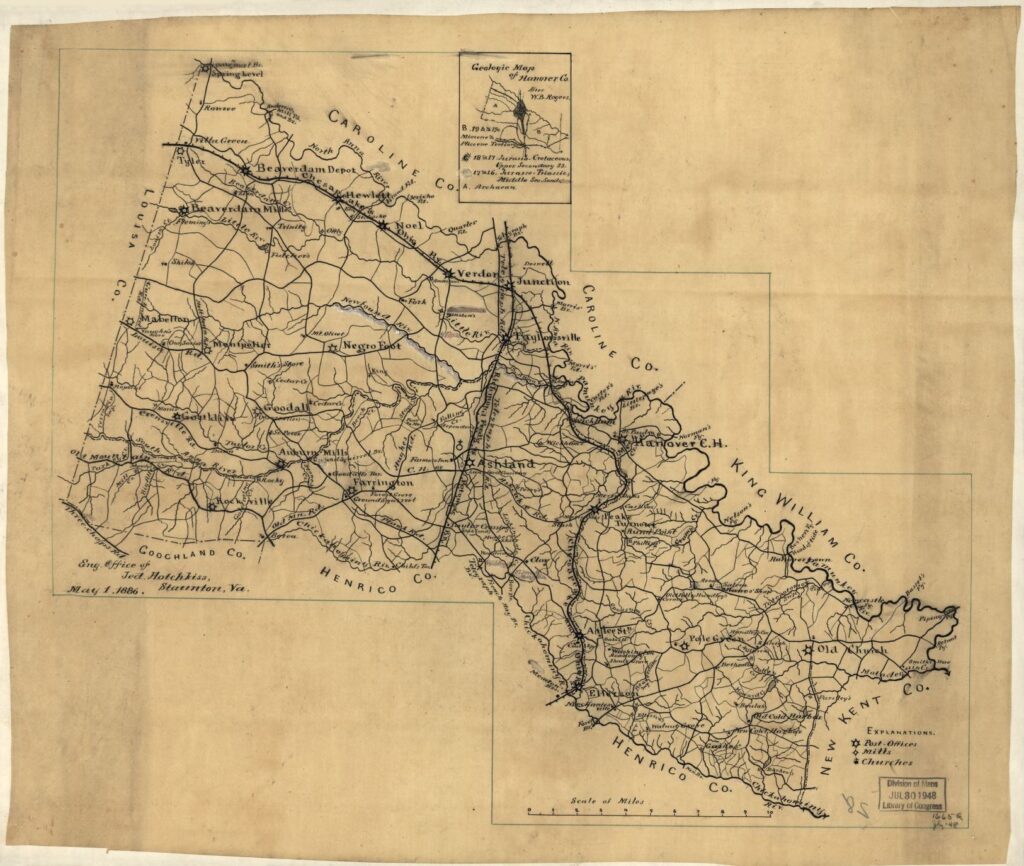 One of the most fought-over counties in the country. See 1864 Overland Campaign and Richmond National Battlefield Park about visiting the sites at Cold Harbor, Gaines’ Mill, Beaver Dam Creek, Haw’s Shop, North Anna, Ashland and many others.

Hanover Tavern, on Route 301 across the street from the old courthouse – Civil War associations vie with Patrick Henry in this historic community north of Richmond. J.E.B. Stuart led his Confederate troopers through here in 1862 during his famed ride around McClellan; the battle of Hanover Court House was fought nearby; and the tavern served as a haven for refugees from Northern Virginia. Guided tours Monday-Saturday, 10 am-4 pm, and Sunday, noon-4 pm. Admission fee. 804-537-5050. Civil War Trails interpretation. 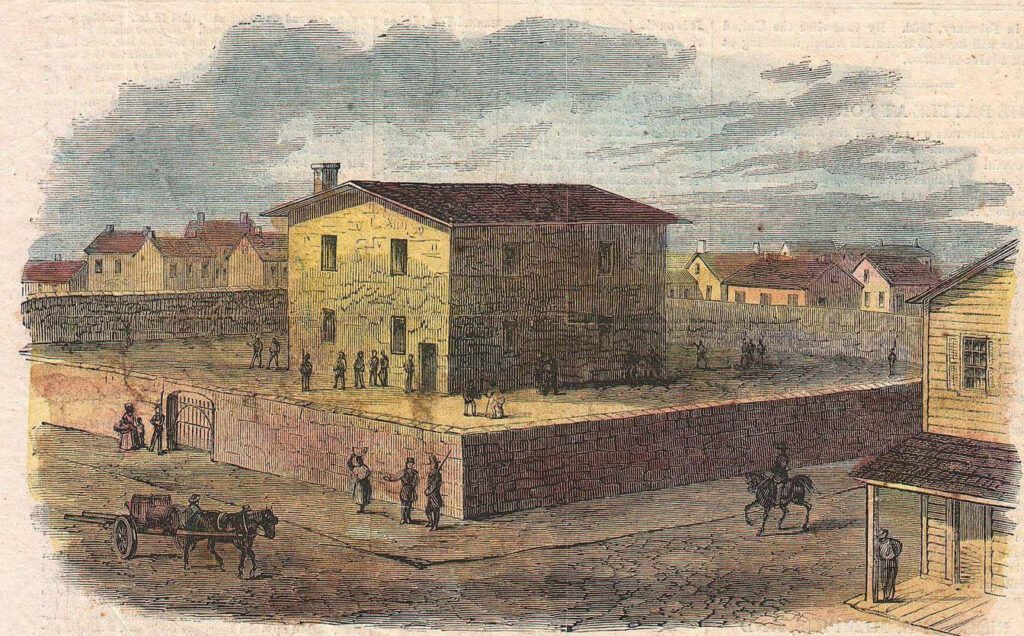 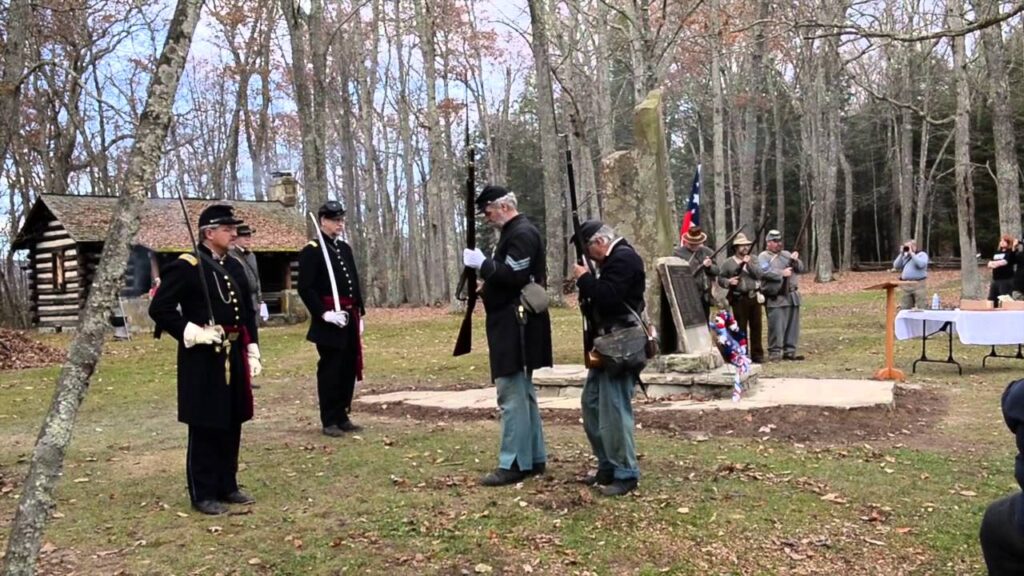 Visit any of the metro Richmond visitor centers and/or the Richmond National Battlefield Park for information about visiting Chesterfield County Civil War sites.

The Bermuda Hundred Campaign Sites This campaign was part of Union commander U.S. Grant’s grand plan for the destruction of Confederate forces in Virginia in 1864. In early May, Union Gen.

Benjamin Butler landed his Army of the James below Richmond and above Petersburg while Grant was marching south from Culpeper and other Union armies were operating in the Shenandoah Valley. Butler’s orders were to drive west from landings between the James and Appomattox rivers and threaten both cities. But the Union commander’s feeble efforts were thwarted by Confederates under Gen. P.G.T. Beauregard.

Within weeks of his landing, the Army of the James was “bottled up” between the James and Appomattox. Butler was to remain there until Petersburg was evacuated in April 1865. 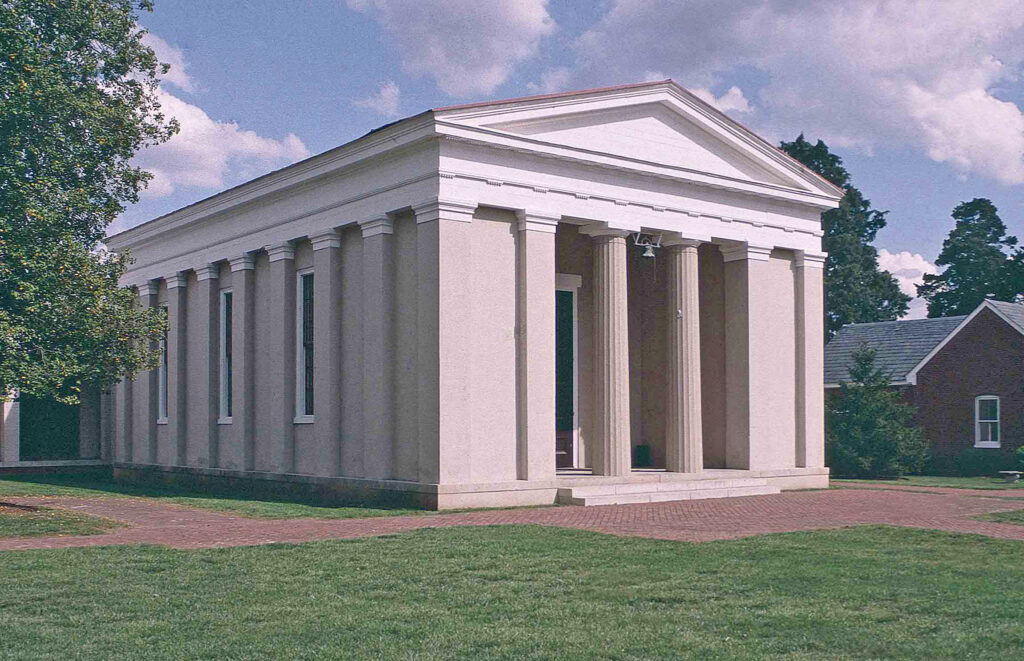 Route 60 is the main road through Powhatan County, which is south and west of Richmond.

When Robert E. Lee’s lines collapsed at Petersburg April 2–3, 1865, Confederates from that city and Richmond retreated south and west to consolidate at Amelia Court House. Many of those soldiers who defended Richmond marched through Powhatan. The following two signs describe this part of the story of “Lee’s Retreat.” More on the subject in Southside/Lee’s Retreat.

Ewell Crosses the Appomattox, Trails sign at intersection of Routes 610 and 604 – On April 4, 1865, Confederate Gen. Richard Ewell, who commanded the Richmond-area forces, faced challenges crossing the Appomattox River near here while trying to join Lee in Amelia. Finding the Genito Bridge unfit, the Confederates crossed near here on the Richmond and Danville Railroad bridge at Mattoax Station.

Powhatan Court House, Trails sign located on courthouse grounds, follow signs to historic Powhatan from U.S. 60 – A large Confederate wagon supply train and some lost and straggling soldiers passed through here after Richmond’s fall. The much-needed supplies, meant to join Lee in Amelia, never made it. The wagons were captured shortly after crossing the Appomattox River near here.

Huguenot Springs, Trails sign at cemetery, follow signs from Route 711 (Robious Road) – A Confederate convalescent hospital was established here in 1862 at the site of an ante-bellum spa and hotel. Locals volunteered their time and limited resources to care for the soldiers here. A mass grave at the site contains the remains of more than 250 soldiers.

Derwent, Trails sign at the home (from U.S. 60, take route 629 north to 646 then to house – After his surrender at Appomattox, Robert E. Lee joined his family in Richmond. Bothered by constant visitors there and limited in funds, Lee began looking for “some small little home in the woods.” He was offered the use of Derwent, moving here late June 1865. He and his family lived here until mid-September when they moved to Lexington and the presidency of Washington College there.

Lee’s Last Bivouac, Trails sign located on Huguenot Trail (Route 711) and Lee’s Landing Road, about four miles east of Route 522 – Robert E. Lee spent the night of April 14, 1865, on the lawn of Windsor, his last camp “in the field” after his surrender at Appomattox. He rode into Richmond and his family’s home the next day.