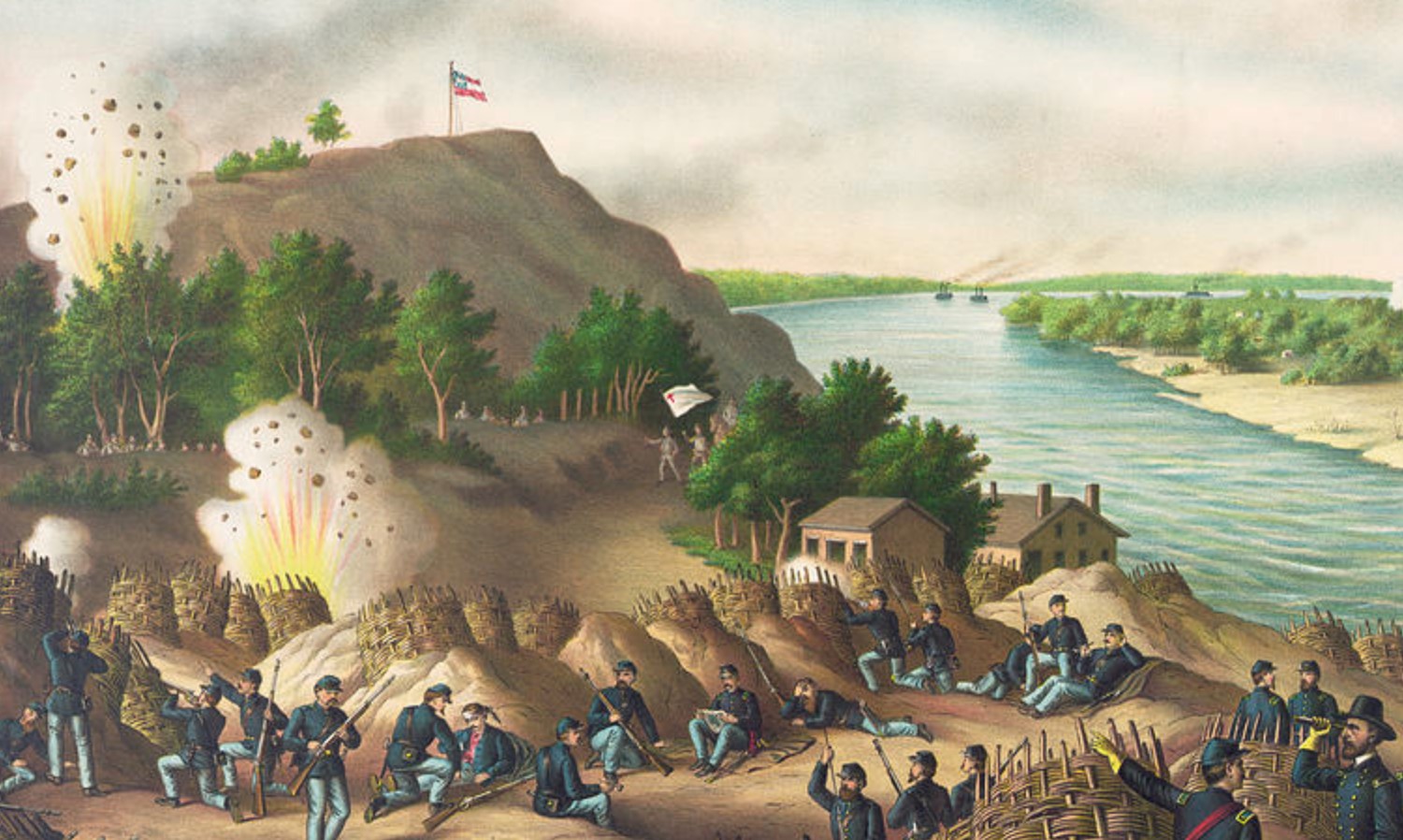 After suffering through months of fits-and-starts trying to get at Vicksburg from the north and east, Grant decided move most of his army west of the Mississippi River, march south, cross back over the river below Vicksburg, and then attack the main Confederate supply line to the city.

Grant needed transportation with gunboat support to get his army back across the river at some point south of Vicksburg, so he ordered Adm. David Porter’s fleet to run the guns under Vicksburg, which it did April 16, 1863. The next day, Grant ordered a cavalry raid under Col Benjamin Grierson against Confederate supply and communication lines, keeping Pemberton preoccupied and off balance in Vicksburg.

While Grant planned a good crossing point, Porter bombarded the Confederate river defenses at Grand Gulf April 29 but failed to neutralize the position. Grant continued to move his army south, crossing near Bruinsburg then moving inland toward Port Gibson. Confederates waited for him there but superior Union numbers prevailed May 1 and the Union army continued northeast.

Grant encountered stiffer resistance at Raymond May 12. The battle there and the fact that Confederate Gen. Joseph Johnston, overall commander in the west, was moving into Jackson made Grant turn toward the Mississippi capital.

Grant’s move toward Jackson with most of his army unnerved Johnston, who evacuated the city May 14 without much of a fight. Johnston then ordered Pemberton to join him in Canton, north of Jackson, which meant giving up Vicksburg.

Meanwhile, hoping to strike a blow against Grant, Pemberton had moved east toward Jackson, hoping for cooperation with Johnston. But Grant moved quickly to the west and forced Pemberton back toward Vicksburg after the decisive battle of Champion Hill May 16.

Grant now could see the prize in view. After brushing aside a Confederate rear-guard at the Big Black River, he approached Pemberton’s well-developed defenses of Vickburg itself. 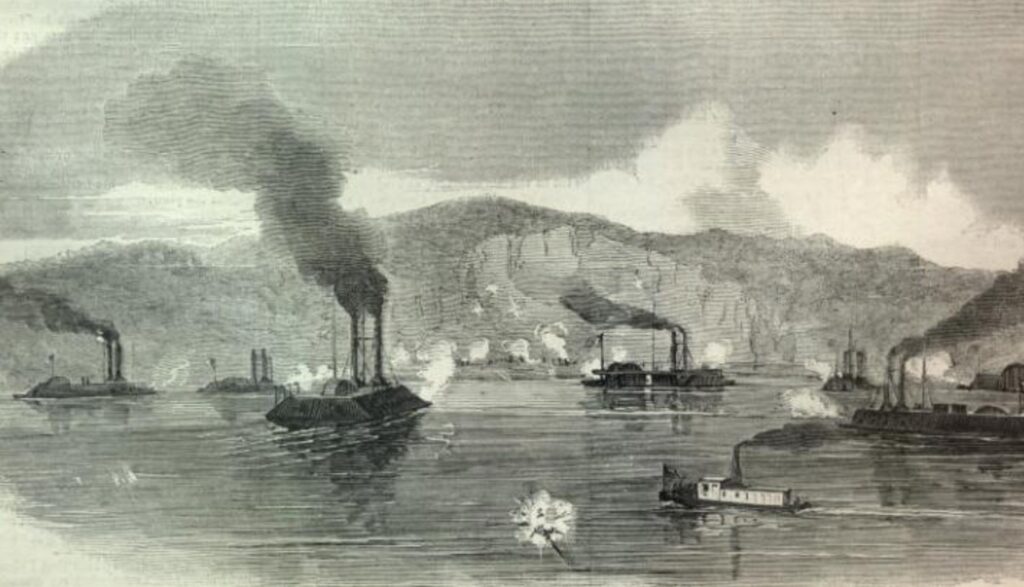 Union Adm. David Porter bombarded the Confederate defenses here for five hours without success on April 29, 1863, hoping to secure a landing spot for Grant’s army advancing on the west bank of the river.

Check in at the museum, more than half its content is devoted to the area’s Civil War history. Artifacts and maps tell the story of the battle here. Exhibits on the grounds include a Civil War-era mortar, 19th-century and earlier structures including those originally here during the war, and remnants of Civil War fortifications.
Open 8 am–5 pm. $3/adult.

Grant landed more than 24,000 troops at nearby Bruinsburg, crossing the Mississippi April 30–May 1, 1863. Marching inland, Union soldiers encountered Windsor, a palatial plantation home built 1859-1861. The house was briefly occupied and served as a hospital following the battle of Port Gibson. Destroyed by fire in 1890, many of columns from the original building have been preserved and remain a remarkable site.

Advancing from his near Bruinsburg, Grant encountered stiff Confederate resistance here May 1, 1863. After a 17-hour battle on the country roads to Port Gibson, the Confederates withdrew. A series of historic buildings, including the Shaifer House, and markers along the roads between the Windsor Ruins and Port Gibson describe the battle. Some of the old roads retain their wartime appearance — and are difficult to negotiate in wet weather.

Grant purportedly said that Port Gibson was “too beautiful to burn.” See for yourself. Confederate Gen. Earl Van Dorn ard the Southern dead from the battle are buried in Port Gibson’s Wintergreen Cemetery.

A Confederate attack May 12, 1863, against one of columns southeast of Raymond failed to stop the Union advance north toward the Southern Railroad connecting Vicksburg and Jackson.

After initial Southern success here, far greater Union numbers finally won the day during a confusing, back-and-forth battle. Visitors to the battlefield now may follow an interpreted trail to and across Fourteen-Mile Creek, much fought over during the battle. A nearby line of reproduction artillery pieces represent Union guns. Other areas of the Raymond battlefield have been preserved and await interpretation.

A driving tour brochure for Historic Raymond is available from the City Hall, 110 Courtyard Square, and local merchants. The tour includes the Confederate Cemetery, 310 Port Gibson St, where many of the dead from the battle are buried, as well as the Hinds County Courthouse and St. Mark’s Episcopal Church, which were used as a hospitals.

The 1839 building has been restored to its 19th-century appearance. An orientation film and galleries explore the history of the building and the area, including Civil War. Open 9 am–5 pm Tuesday–Saturday and 1–5 pm Sunday. Free.

West of Jackson, south of I-20, between Bolton and Edwards

Deciding the best way to both strike Grant and defend Vicksburg, Pemberton decided to move with more than 20,000 troops toward Grant’s long and vulnerable supply line, expecting cooperation from Johnston in Jackson. When Johnston evacuated Jackson, he wanted Pemberton to join him. Before that could happen, on May 16, Grant’s forces attacked in the vicinity of Champion Hill near the main Jackson Road and the Southern Railroad. After brutal fighting on the hot day, Pemberton gave way and fell back to the Big Black River. The battlefield today remains much as it was that day and is the subject of preservation and interpretation projects.