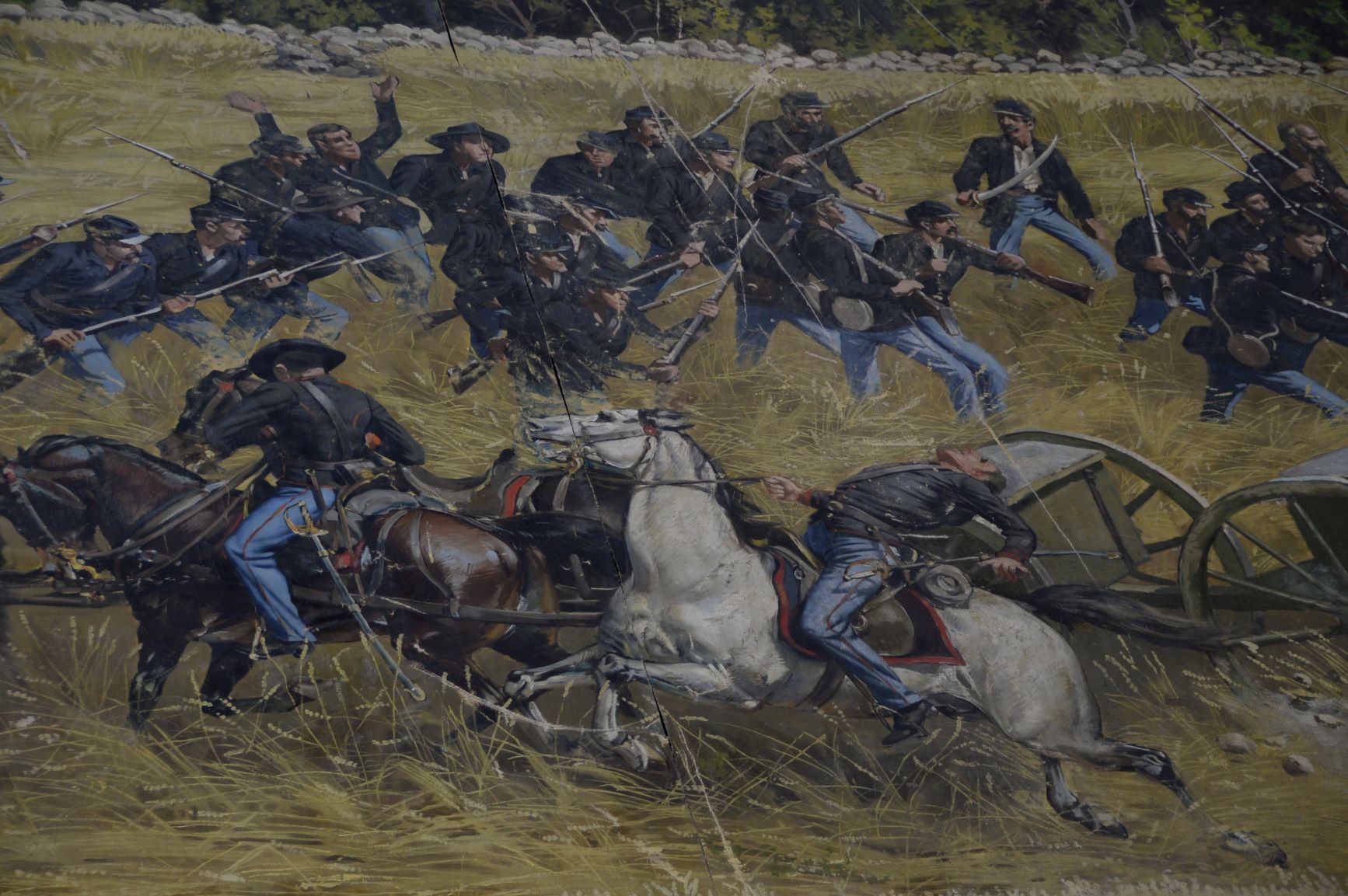 After making his famous “March to the Sea” to Savannah, Ga., in late 1864, Union Gen. William T. Sherman cast his eyes northward toward the Carolinas and a possible link-up with Gen. U.S. Grant, who then was tightening his noose around Gen. Robert E. Lee at Petersburg, Va.

Sherman’s army of 60,000 entered South Carolina in February 1865 and moved quickly north, burning the capital at Columbia and destroying and looting countless civilian farms and plantations.

Entering North Carolina the first week in March, Sherman marched toward Goldsboro, an important railroad junction sitting on what had been “Lee’s Lifeline.” Union forces quickly captured Fayetteville and burned the arsenal there. Confederate resistance at Averasboro was swept aside.

Confederate commander Gen. Joseph Johnston managed to assemble a force large enough to put up a fight at Bentonville March 19–21, but the weight of Sherman’s advance eventually overwhelmed him.

Johnston withdrew, his army ending up west of Raleigh. After more than a week of negotiation near Durham, Johnston surrendered his troops April 26, 1865.

Last Stand in the Carolinas: The Battle of Bentonville by Mark Bradley, published by DaCapo Press 1996

This Astounding Close, The Road to Bennett Place by Mark Bradley, published by the University of North Carolina Press 2000

Sherman’s March through North Carolina by Angley, Cross and Hill, published by Division of Archives and History, North Carolina Department of Cultural Resources 1996

Free, full-color map/brochures are available from the following sources:

• Fill out our Free Info form for the map plus information about more Civil War sites in Maryland, Virginia, North Carolina and West Virginia
• Call 800-VISIT-NC
• Visit www.visitnc.com
• Download a PDF version [612K]. This requires Acrobat Reader, which is available free from Adobe.

Rifles and other weapons used by the Confederate army were manufactured here until part of Sherman’s army marched through in early March 1865. The soldiers encountered towering pine forests, some of which were set on fire by retreating Confederates, and a carpet of pine needles on the Old Wire Road as they entered North Carolina.

Sherman and part of his army camped here the evening of March 8, issuing orders to deal “moderately and fairly” with the citizens of North Carolina. The church, still standing, maintains examples of soldier graffiti from the episode.

Sherman’s troops used trees and fence posts to “pave” the muddy road here during their march to Fayetteville. Confederate cavalry began harassing the march near here.

As Wilmington was threatened in early 1865, some of its railroad facilities and citizens relocated here, a stop on the Wilmington, Charlotte and Rutherford Railroad. Sherman’s forces entered the town on March 7 and destroyed the depot, shops and other railroad facilities.

Union Gen. Joseph Roswell Hawley was born here in 1826, moving north in 1837. Hawley returned to the area with the Union army after the fall of Wilmington and stayed on as the Military Reconstruction commander in the area. Part of Sherman’s army marched by the house March 8.

Sherman destroyed the arsenal here March 11, 1865. It was one of his first objectives after entering North Carolina. The history of the arsenal, some of the ruins, and outlines of some of the original structures are preserved here. (See also Central NC: Fayetteville.)

Trails sign on Hay Street, 50 yards from the Bragg Boulevard intersection, in Fayetteville

The home of the pro-Southern editor still stands here near the arsenal, but the offices of his Fayetteville Observer were burned by Sherman’s soldiers.

Local tradition has it that this house, home to John Sandford, was used as a barracks for Sherman’s troops during the occupation of the town. Later, the building was owned by John Daingerfield, who was a clerk at the Harpers Ferry arsenal during John Brown’s 1859 Raid and came to town when some of the equipment there was transferred to the local arsenal after the war began.

This stately landmark and town centerpiece, dating from 1832, was the scene of a brief cavalry action as Union forces entered Fayetteville.

Confederate soldiers withdrawing from Fayetteville set fire to this bridge over the Cape Fear River March 12 to delay the pursuit of one of Sherman’s columns. Despite attempts to extinguish the flames by the Union troops, the bridge was destroyed. A pontoon bridge was soon constructed and, by March 14, the Union army resumed the chase.

Most of Sherman’s left wing (about 30,000 troops) marched past this church March 14 on the way north from Fayetteville. The troops encountered increasingly strong resistance culminating in the battle at Averasboro March 15–16.

Trails sign at Longbranch Road and Norma Drive, 0.5 mile west of I-95 Exit 71

After the fighting at Averasboro, Sherman continued his advance toward Goldsboro, passing this point.

1243 E Cumberland St, Dunn NC (Route 421, about a mile southeast of I-95 in Food Lion shopping center)
Sherman’s left wing passed by this point March 17 while Johnston, then at Smithfield, searched for a way to slow the Union advance.

Nicely preserved and interpreted Bentonville Battlefield State Historic Site offers audio-visual programs, a bookstore and driving tour information at the visitor center. Tours of the nearby Harper House, used as a hospital after the battle, are available. Trails sign on site.

“Merging of the Armies”

This tiny wartime community was a focus for Confederate activity early in the battle. It was the site of Johnston’s headquarters and of hospitals serving the wounded from both sides. A Union attack March 21 near here was held back, but the Confederates retreated toward Smithfield that night.

Confederates held this position the evening of March 21 as most of Johnston’s army left the Bentonville area bound for Smithfield. Union soldiers were on their heels. Skirmishing here hastened the Southern retreat.

This is the main road used March 19 by Johnston as he deployed his Confederate army south from Smithfield before the Battle of Bentonville. Part of Johnston’s army used this “wretched road” on its retreat from the battlefield three days later.

Trails sign at the North Carolina Highway Patrol station on Route 301, 0.5 mile north of I-95

Elements of the Union X Corps marched by this spot after leaving Goldsboro April 10 heading northwest toward Raleigh. 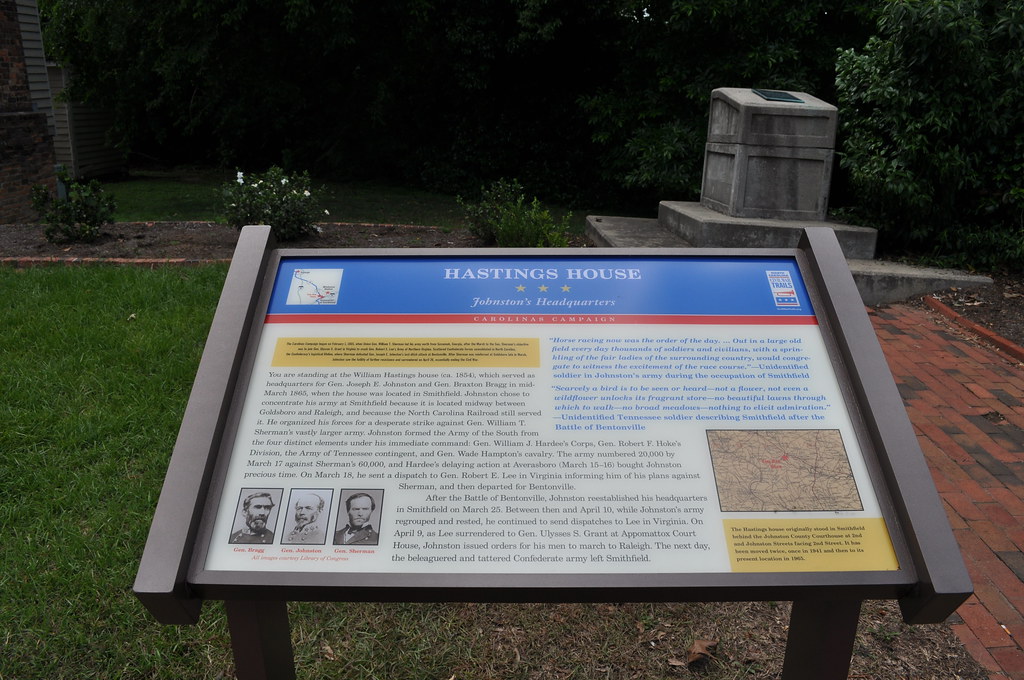 This 1854 home served as headquarters for Confederate Gens. Johnston and Bragg mid-March 1865. From here, Johnston ordered the concentration of forces and the attack March 19 at Bentonville. Johnston returned after the battle, resting his battered army.

Confederates withdrew from Smithfield April 11, and the town soon was occupied by Union infantry. Sherman established his headquarters at the courthouse, announcing Lee’s surrender from its steps.

Trails sign at the corner of Buffalo and Old Beulah roads, 1.5 miles north from the Route 70 bypass, near Selma

The last reviews of Johnston’s Confederate army occurred here April 4 and 7. The troops were urged to “fight till Hell freezes over!” by North Carolina Gov. Zebulon B. Vance. A week later, the army pulled out toward Raleigh.

Two former North Carolina governors, William A Graham and David Swain, traveled here from Raleigh April 12, 1865, with a letter from Gov. Zebulon Vance requesting a meeting to discuss peace terms. Sherman, headquartered here, received the letter and agreed to safeguard the state capital, which Johnston was then in the process of evacuating.

Union cavalry forces pursued Confederates along the line of the railroad and past this station after Raleigh was occupied April 13. This rural area was home to white farmers and an unusually large number of free blacks during the war.

Fighting erupted here at the Morrisville depot as Union and Confederate cavalry clashed following the Federal capture of Raleigh. The Confederates were fighting in part for a train headed west loaded with supplies and the wounded Gen. Daniel Reynolds. The train got away, but that night a message to discuss surrender terms reached the Union commander here and was forwarded to Sherman in Raleigh.

Trails sign adjacent to the Durham Bull’s Athletic Field, at the corner of Blackwell and North Dillard streets, 2 blocks south of Main Street

Trails sign at Patterson’s Country Store on Farrington Road, 1 mile north of Highway 54. From I-40, take Exit 273 onto Highway 54 West, turn right at first traffic light onto Farrington Road. The store is 1 mile on the right.

Several heavy skirmishes near here proved to be the last of the Civil War in North Carolina as Union cavalry pursued retreating Confederates.

Trails sign in the parking lot of West Point Park on the Eno, off Route 501 North, 5 miles north of I-85

This was the northern boundary of the truce line established April 19, 1865, while the army commanders negotiated peace terms at Bennett Place. It was an uneasy truce, though, with stragglers and hungry civilians scavenging for food.

This was the site of surrender negotiations begun April 17 between Gens. Johnston and Sherman. The event was finalized April 26. Trails sign on site.

Much of Gen. Joseph Johnston’s army camped near here April 1865 while surrender negotiations were going on at the Bennett Place. The structure located here, the Dickson House, was the headquarters of Confederate Gen. Wade Hampton and was the scene of many important meetings. The house has been moved to the Hillsborough’s historic district and serves as the town’s visitor center.

The northern column of Johnston’s army divided here with one wing traveling west along present-day Route 70. Along the way, they were met with food and equipment from Salisbury, a situation much different from Lee’s Army of Northern Virginia, which was marching away from its main supply sources.

Johnston’s southern column approached this river crossing April 15, fleeing west from Sherman’s army. Many of the men drowned while trying to cross the rising water.

Flooding again had raised the level of this creek here the morning of April 15 as Johnston’s army continued west. It was a dangerous crossing. One Confederate officer rescued several men as they floated helplessly downstream.

Parolees from Lee’s defeated Army of Northern Virginia, making their way home from Appomattox, confirmed Lee’s surrender while part of Johnston’s army camped here. The ground was the site of a May 16, 1771, battlefield where Gov. William Tryon’s militia defeated tax protestors.

Confederate Gen. William Hardee made his last headquarters here on the grounds of Trinity College when he learned that Johnston was negotiating surrender at Bennett Place. After parole, Hardee left for Salisbury to board a train for Alabama.

More than 12,000 victorious Union soldiers camped here May 1, 1865, en route to Washington DC. The troops taxed the town’s infrastructure, taking over acres of orchards and school grounds. While some residents hid in their homes, ex-slaves rejoiced in their new status. At least some Union soldiers remained in town until July 27.

As Sherman marched north from South Carolina, Confederate authorities thought one of his objectives must be Charlotte. Some of Sherman’s cavalry did make a feint toward Charlotte as a diversion. That cavalry encountered Confederate horsemen here. The resulting engagement, March 1, resulted in some of the first shots fired in North Carolina during the campaign.

Battle of Wyse Fork – Another battle related to the Carolinas Campaign was fought March 8–10, 1865. Union Gen. John Schofield began moving west from New Bern in early March and was met by a variety of Confederate forces east of Kinston. For a description, see Eastern NC: Kinston-area.