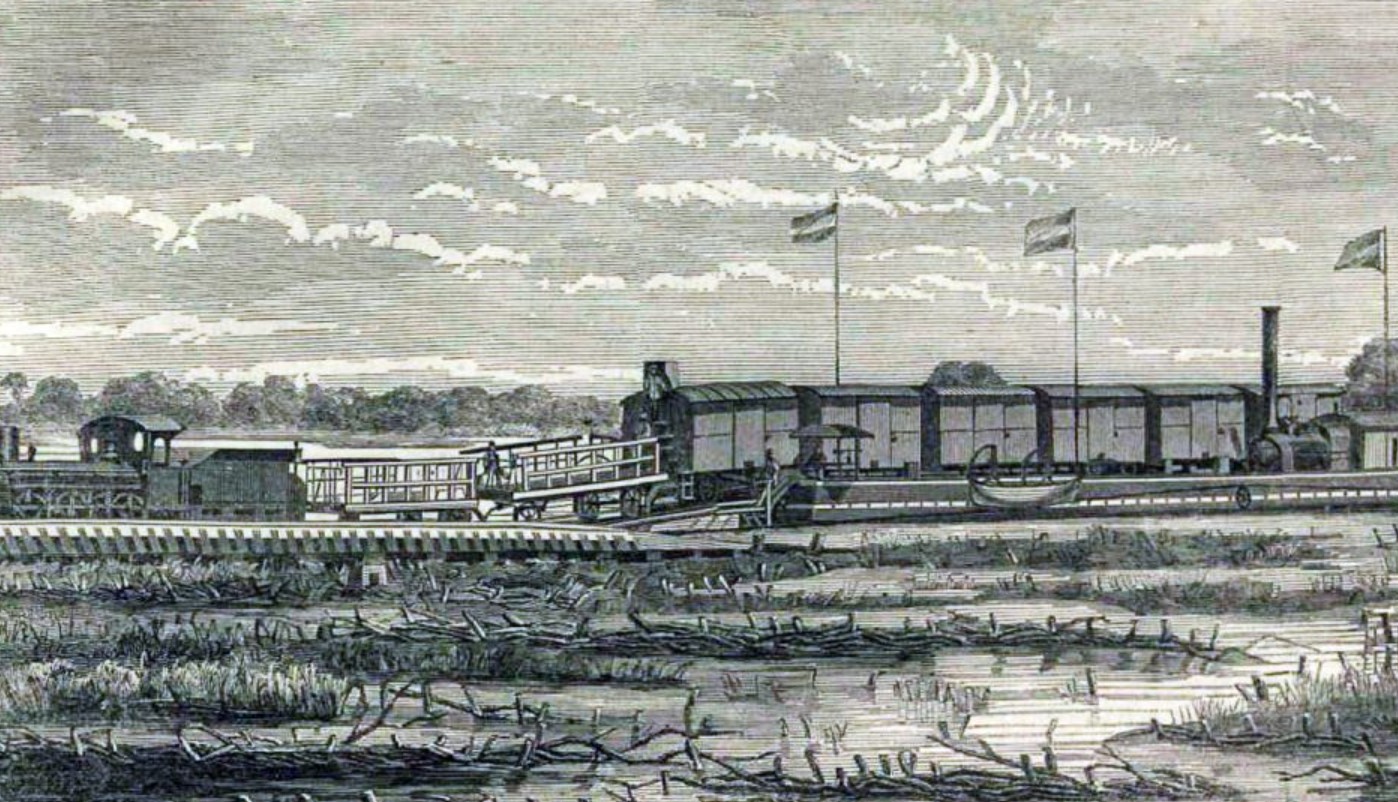 By mid-spring 1864, war clouds were building over Northwest Georgia. Union Gen. William Tecumseh Sherman was building a huge army group and supply base at Chattanooga, preparing to launch a major offensive against Atlanta. Just a few miles south in his stronghold in Dalton, Confederate commander Gen. Joseph Johnston was preparing for the onslaught, making sure his critical supply and communication line to Atlanta, the Western and Atlantic Railroad was protected.

Sherman unleashed his 110,000-man army in early May against a Confederate army half its size. The earliest battles and manuevers set the tone for the entire campaign as Sherman sought to get between Johnston and Atlanta. The Confederates managed to parry the Union thrusts, withdrawing slowly along the railroad. But Sherman kept moving and finally Johnston ran out of space — and time.

By early July, the Confederate army was backed up into the Atlanta suburbs. Impatient with the situation, Confederate President Jefferson Davis replaced Johnston with Gen. John Bell Hood, who soon launched several doomed and costly attacks against the Union army that was slowly encircling the city.

Hood finally abandoned Atlanta Sept. 1. It was occupied by the Union army the next day.

The following sites are listed in chronological order and move generally north to south as the campaign progressed. The thread connecting most of the sites, especially early in the campaign, is US 41.

Five “Atlanta Campaign Pavilions” established in the 1930s are located alongside that road. Look for the “Blue and Gray Trail: The Civil War in North Georgia and Chattanooga” brochure at visitor centers along the way.

This small railroad town (and its historic 1849 depot) played a part in many of the area’s dramatic Civil War events. It was the last depot on the way north for the Andrews Raiders during the Great Locomotive Chase in 1862; and fighting swirled around the depot Nov. 23, 1863, as Confederates defended the town and the gap (just south) when the Southern army retreated from Chattanooga. On May 4, 1864, Union troops pushed through Ringgold Gap, moving southeast along the Western and Atlantic Railroad beginning the campaign for Atlanta.

The first of several Atlanta Campaign Pavilions, built in the 1930s with marginally helpful bas-relief maps set in stone, is located in a small park south of the depot on US 41.

The focus of this historic area is the 1,477-foot Western and Atlantic Railroad tunnel, built in 1850. Sherman occupied the area after brief skirmishing May 7, 1864, preparing to move toward Atlanta.

The Union commander made his headquarters in the Clisby Austin House. The year before, following the Battle of Chickamauga, the structure was used as a Confederate hospital. Gen. John Bell Hood recovered here after the amputation of his leg.

Confederate Gen. Joseph Johnston picked a good place for his army of nearly 50,000. Dalton is nearly surrounded by easily defended mountains and sat astride the path to Atlanta on the Western and Atlantic Railroad.

Sherman attempted assaults on Dalton May 8, 1864, but the strong mountain positions benefited the defenders. Johnston’s troops fought off attacks at Rocky Face Ridge and Dug Gap.

Highlights of a town Civil War tour: The 1847 Dalton Depot, a busy place during the war, now a restaurant (110 Depot St) and the Joe Johnston statue at Hamilton and Crawford streets. Another of the Atlanta Campaign Pavilions is located on US 41, 1 mile north of I-75 exit 336.

West Dug Gap Battle Road, Dalton GA 30720
800-331-3258, 706-278-0217Great place to gain an understanding of just how strong the Confederate position was at Dalton. More than 1,000 feet of the original stone wall built by Southern defenders remains. The battle here May 8, 1864, was won by the Confederates even though they were outnumbered 10:1. Part of the defensive tactic here was rolling boulders down on the attackers trying to climb the steep slope.

To get there: From I-75 exit 333-Walnut Ave, drive west up the mountain 2 miles; park on pull-off on the right at the top of the ridge.

Sherman, hoping to get south around Johnston and cut his supply and retreat line on the railroad, ordered part of his army around Johnstonâ€™s left flank at Dalton and through a mountain gap to Resaca. Johnston managed to get reinforcements to the river and railroad town in time and fought off Union attacks here May 13â€“15, 1864. This was the first major battle of the campaign.
Sherman finally disengaged and slipped south to try again, which became a pattern in the campaign.

Miles of interpreted trails, a pavilion and more highlight the park in Camp Creek Valley, site of fighting during the May 13-15 Battle of Resaca. Trails through the park take visitors to earthwork remains and other battle-related sites. Open Friday-Sunday during daylight hours. Free.

A 65-acre park preserves the remains of two fortified areas built by Confederates near the bridge across the Ostanaula River. The area was used by the Confederates as a staging area funneling troops north and was in action during the May 1864 Battle of Resaca. A mile of interpreted trail takes visitors through the fort. Open daylight hours. Free.

Located about 2 miles north of Resaca at the end of Confederate Cemetery Road. From US 41 north of the Atlanta Campaign Pavilion, turn east.

The remains of about 450 Confederate soldiers are here, most casualties of the nearby battle. Some battle information here in a kiosk.

Some fighting as Johnston made a brief stand near here May 17 then withdrew to the Cassville area. Andrews Raiders passed through two years earlier during the Great Locomotive Chase. The Chase is commemorated with an annual downtown festival the first weekend of October.

After occupying Kingston May 19, Sherman spent some time here trying to figure out what Johnston was up to. After learning his counterpart has withdrawn along the Western and Atlantic to a strong position in the Allatoona Mountains, Sherman left the railroad and headed south toward Dallas, hoping again to get between the Confederate army and Atlanta.

Troop movements and a description of the May 18 Battle of Cassville are detailed in another Atlanta Campaign Pavilion at Cassville, located east of Kingston at US 41 and Cassville Road.
Kingston saw Sherman again as he half-heartedly pursued Hood north in early November 1864. Sherman received the go-ahead for his “March to the Sea” in Kingston Nov. 12.

The Andrews Raiders were delayed here during the Great Locomotive Chase in 1862.

Among the Civil War sites in Kingston are the Kingston Confederate Cemetery at Railroad and Cemetery streets.

678-721-6700, allatoona.sam.usace.army.mil/allatoona
Good Civil War displays inside and a great view from a nearby overlook of the remains of Cooper’s Furnace, the only surviving structure of the Etowah Iron and Manufacturing Company burned by

To get there: From I-75 exit 290, drive east on GA 20. Take the first right at the light for GA Spur 20, then 4 miles to the end of the road. Turn right through the gate to the Project Management Office.

(This site is out of sequence with the Atlanta Campaign. The battle fought here occurred more than a month after the city’s fall. See Hood Moves North.)

More than 30 percent of the troops engaged here were casualties in this short but intense Oct. 5, 1864, battle. The outnumbered Union garrison here guarding the Western and Atlantic Railroad managed to hold out against several ferocious but futile attacks. Great trail leads back to the railroad cut with many historic features, including original fortifications along the way.

To get there: From I-75 exit 283, drive east on Old Allatoona Road 1.5 miles, cross railroad tracks, continue 1 mile, markers on left.

Johnston, flanked once again from his strong position on the railroad in the Allatoona Mountains, moved west to confront Sherman about 25 miles northwest of Atlanta.

Sherman expected a lighter Confederate force at this rural intersection and was bloodied in a sharp battle here May 25, 1864.

Great state park here offers several trails exploring this well-preserved battlefield. About 14,000 Union troops, hunting for the Confederate flank in the area, ran into about 10,000 Confederates under famed Gen. Patrick Cleburne. The battle, fought late in the afternoon on nearly impossible terrain, was a decisive Confederate victory, delaying Sherman on his way to Atlanta. State park open Thursday-Saturday 9 am–5 pm. $5.50/adult.

This Western and Atlantic railroad town was known as Big Shanty during the war. Best known as the spot where the Great Locomotive Chase began in 1862, the town also was used as a Union supply base and hospital center during the Atlanta Campaign.

After the battles in the Dallas area, Sherman moved back toward the railroad at Acworth while Johnston occupied positions in the mountains just south. Again marching southwest, Sherman forced Johnston to withdraw to a very strong fortified line on Kennesaw Mountain just west of Marietta.

On June 22, part of Johnston’s army attacked a Union column attempting to get south around the Confederate flank at Kolb’s Farm. Thinking he saw a possible weakness in the Southern position, Sherman decided to stage a two-pronged attack June 27.

The resulting battle was a disaster for Sherman. He lost nearly 3,000 men. The well-placed Confederate defenders lost only 800.

Highlights in the park include preserved trenches occupied by the troops led by famed Confederate general Patrick Cleburne. More than 17 miles of walking trails and a self-guided auto tour are offered. Several parking areas outside the main visitor center are often crowded. Park open dawn-dusk. Visitor Center open 8:30 am-5 pm daily. Free. Small charge for shuttle service to the top of the mountain.

The Great Locomotive Chase (Andrews Raid) is the star of this excellent museum with a film and several exhibits, including the famous locomotive “The General” itself, devoted to the subject. The museum is located on the site where the Chase began. But there is much more here including displays on the role of railroads during the war and exhibits of general Civil War interest. Open Monday–Saturday 9:30 am–5 pm, Sunday 11 am–6 pm. $7.50/adult. 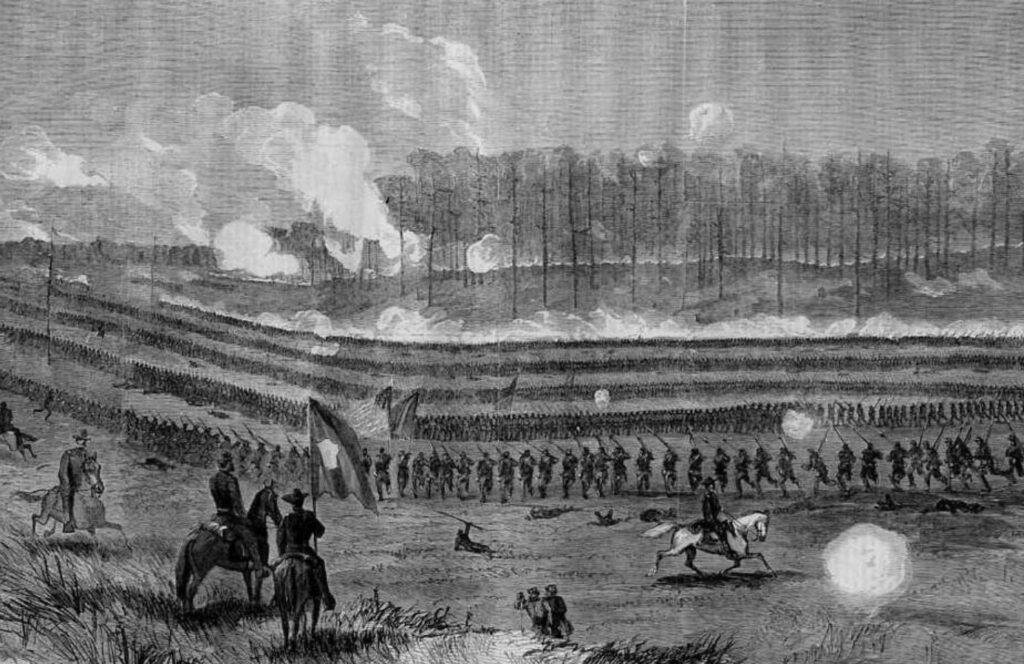 Although Kennesaw Mountain was a decisive Confederate victory, Johnston was forced to abandon the position and the town of Marietta July 2, 1864, after Sherman again got south around his flank.

The Marietta Welcome Center is located in the former Western and Atlantic Railroad passenger depot, built on the site of the Civil War-era station burned by Sherman’s troops in 1864. Pick up good walking/driving tour and other information here. Among Civil War attractions here are the Confederate and National cemeteries and Brumby Hall and Gardens, which was once the site of the Georgia Military Institute.

The museum is housed on the second floor of the historic Kennesaw House that was built as a cotton warehouse in 1845. The Civil War gallery is located in the room occupied by Andrews and his raiders when they planned their famous railroad raid in 1862. The building was used as a hospital and morgue in 1864. Among items in the gallery are artifacts from the Georgia Military Institute, Civil War rail artifacts and much more. Open Monday–Saturday 10 am–4 pm. $7/adult.

Sherman’s troops arrived here from Marietta July 5. Confederates had burned the Chattahoochee River bridge to slow the advance, but Sherman ordered it rebuilt. Shortly after the town’s occupation, Union soldiers burned the manufacturing facilities here, including the Roswell Mills. Workers at the mills, mostly women, were arrested, charged with treason and shipped north. Ruins of the mill can be seen at Roswell Mills & Sloan Street Park. Exhibits and tour information at the visitor center. Monuments and markers commemorate the burning and the treatment of the mill workers and a walking tour covers several antebellum homes with Civil War stories. A Civil War/Roswell Mills audio tour is available for download; see GA Links.