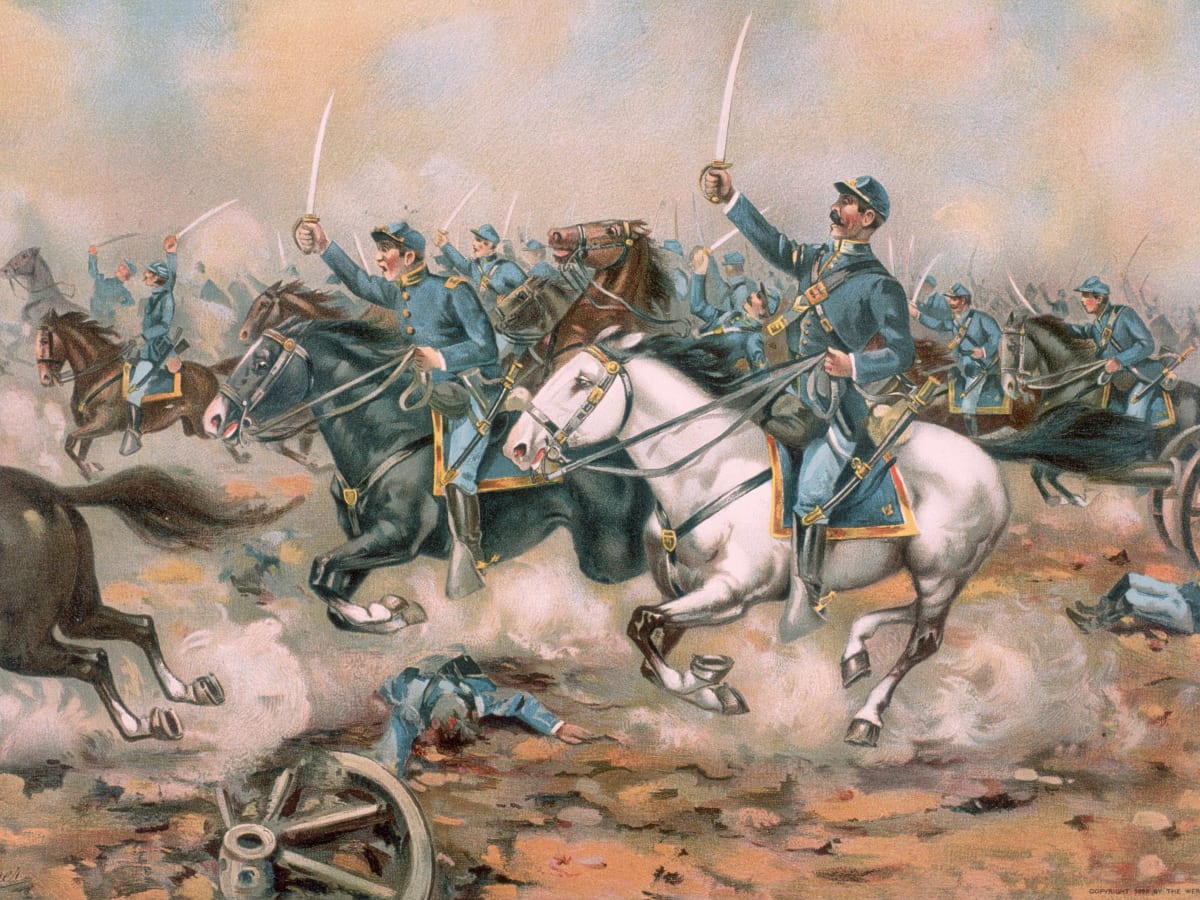 Download official Virginia Civil War Trails [PDF 924K]. If needed, please download and install the free Adobe Acrobat Reader.]
Request a free printed full-color to be sent to you by mail, along with additional materials about visiting Civil War sites in Virginia.

In the early spring of 1862, the Union Army of the Potomac landed at Fort Monroe at the tip of the Virginia “Peninsula” formed by the James and York Rivers. The battle of the ironclads March 9 had cleared Hampton Roads, enabling the Federal water transports to land unmolested. Union Gen. George McClellan hoped to march west on the Peninsula and capture Richmond, less than 100 miles away.

Confederates, led by Gen. John Magruder, manned strong fortifications behind the Warwick River, holding off the Federal juggernaut for a month before making a fighting withdrawal through Williamsburg in early May. The Confederate armies fell back to the Richmond defenses and were pinned down by mid-May. Taking command of the Southern army in June, Gen. Robert E. Lee broke the tightening Federal noose fighting what became known as the Seven Days battles. Lee’s attacks succeeded in driving McClellan from the immediate Richmond area.

Less than two months later the theater of war had shifted to Northern Virginia.

A Virginia Civil War Trails driving tour connects some of the most significant sites of the campaign from Fort Monroe to Richmond. The following sites are marked by Civil War Trails interpretation unless otherwise noted.

Fort Monroe – Built 1819–23, it is the largest moat-encircled masonry fortification in America and an important Union base for campaigns throughout the Civil War. Robert E. Lee served here 1831–34. Trails signs at the Casemate Museum. [More information in Tidewater Museums and Visitor Centers.]

Fort Wool, Hampton Roads – Island fort was companion to Fort Monroe. It was used in operations against Confederate-held Norfolk in 1861-62. Accessible by tour boat in season. Trails sign on the grounds of Fort Monroe with a view of Fort Wool.

Hampton – Small port was burned by local Confederates Aug. 7, 1861, to prevent its fall into Union hands. Hampton tour passes St. John’s Church, the lone survivor of the destruction. Trails sign at the Air and Space Center. Information about St. John’s is available at the church.

Stalemate in Hampton Roads, Trails sign at Lasalle and Chesapeake Aves in Hampton – After the March 8–9, 1862, Battle of Hampton Roads, the CSS Virginia returned to drydock for refitting, leaving a nervous calm in the area. The Virginia came out April 11 to threaten Union shipping but the Monitor didn’t respond and little damage was done.

Congress and Cumberland Overlook, Newport News – Scene of the March 8, 1862, sinking of the USS Cumberland and USS Congress by the ironclad ram CSS Virginia (Merrimack).

Gosport Navy Yard, Portsmouth – The oldest naval shipyard in the United States. Captured by the Confederates April 21, 1861, the USS Merrimack was converted to the ironclad ram CSS Virginia here. See also the Portsmouth Shipyard Museum, downtown. Naval yard partially accessible during the summer via trolley or boat tours. See the Portsmouth section. Trails sign located on the South Lawn of the Portsmouth seawall.

The following two sites, located near Smithfield, are on the south side of the James River.

Fort Boykin Historic Park, 7410 Fort Boykin Trail, Smithfield VA – Originally built in 1623 and used during the American Revolution and the War of 1812, this fort was captured May 17, 1862, by Union naval forces. A nice park includes interpretation outlining the fort’s history. Civil War Trails and other interpretation on site.

Fort Huger, 15080 Talcott Terrace, Smithfield VA 23430  – Restored Confederate James River fort with interpreted walking trails about 8 miles from Smithfield. This was one of the forts on the south side of the James intended to block the approaches to Richmond. It was captured (along with its sister Fort Boykin) in May 1862 by a Union flotilla about a week before Union warships were turned back near Richmond at Drewy’s Bluff. Open 8 am–dusk. Free. 866-899-0688 (tourism office) or www.smithfield-virginia.com. Civil War Trails sign.

Young’s Mill, Newport News – This 1820 mill was the site of a major Confederate camp in 1861-62. The earthworks located near the mill are part of Magruder’s first Peninsula line.

Warwick Court House, Newport News – Built in 1810, this building served as headquarters for Union Brig. Gen. Erasmus Keyes during the Warwick River/Yorktown siege. The gas balloon Constitution was deployed at this site.

Battle of Dam No. 1, Newport News – McClellan’s only real effort to break Magruder’s Warwick River lines was here April 16, 1862. Heavily entrenched Confederates turned back the Union attack. A trail, featuring signs describing the battle, winds through well-preserved Confederate fortifications here. Begin the walking tour at the parking area near the pedestrian bridge over the lake, which was the Warwick River. Cross the lake to see the earthworks. Interpretive signs on both sides. More information is available at the Newport News Visitor Center at the entrance to the park, open daily, or at a small museum at the site, open seasonally. 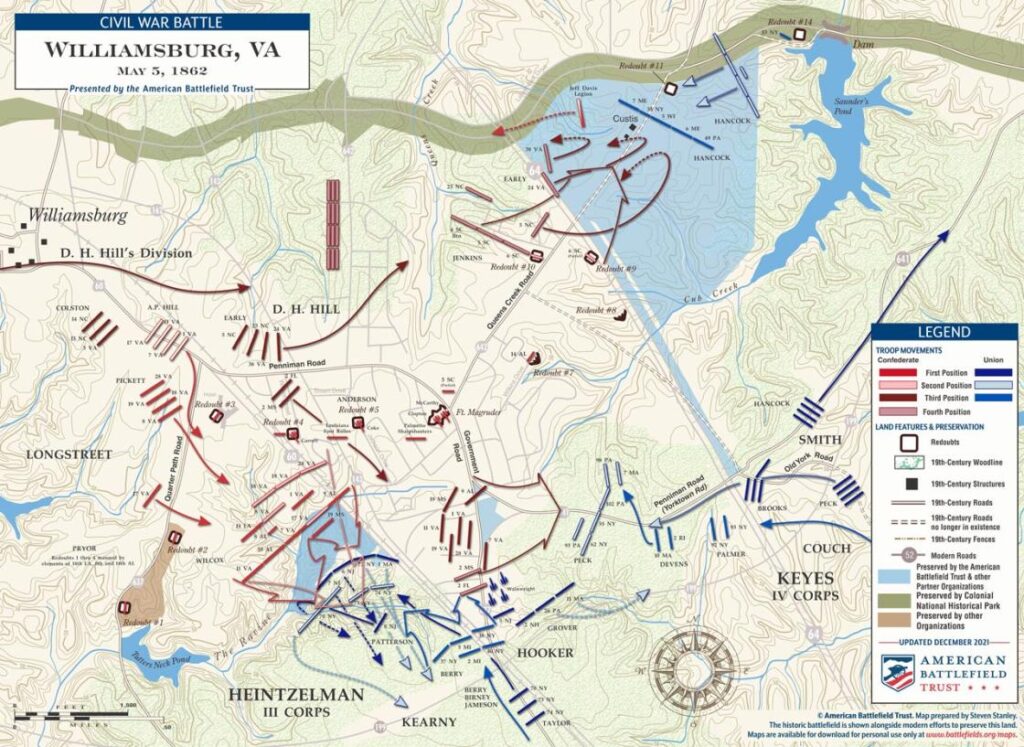 Endview, Yorktown Road, Newport News – Built circa 1760, was used by both Confederate and Union forces as a hospital during the campaign. Hosts frequent living history programs. [More information in Tidewater Museums and Visitor Centers.]

Lebanon Church, Trails sign next to the Endview sign on Route 238 – Countless Confederates passed by this spot in April 1862 on their way to man the main Peninsula line a short distance to the east. The Southerners abandoned the position and fell back to the west on May 3. The church became a Union headquarters shortly before the Battle of Williamsburg.

Yorktown – Most famous as the site of the last major battle and siege of the American Revolution, Yorktown was the focus of Major Gen. George B. McClellan’s siege operations against Confederate forces commanded by Major Gen. John Bankhead Magruder and Gen. Joseph E. Johnston. Civil War Trails interpretation on Route 238 near Route 17. Also see the National Park visitor center for Civil War information.

Archer Cottage, Yorktown – Destroyed in the fire of 1814, the current cottage was rebuilt in the 1820s on the original foundations. When Confederate forces withdrew from Yorktown, opening up the York River for the Union navy, Yorktown became a busy Union port that supported McClellan’s advance toward Richmond. Located on Yorktown riverfront.

Gloucester / Tyndall’s Point, Gloucester – Confederate batteries here helped deprive McClellan the use of the York River. Park contains remains of the earthworks here. Trails sign on the Gloucester side of the Route 17 bridge in a county park just north of the toll plaza.

Redoubt 12, New Quarter Park, York County – Part of Magruder’s Williamsburg (3rd) Defensive Line and site of late-afternoon action during the Battle of Williamsburg. Redoubt 12 and nearby Redoubts 11 and 14 helped form the York River end of the line.

Fort Magruder, Penniman Road, Williamsburg – The center of the Williamsburg Line guarding the juncture of two roads leading from the lower Peninsula to Richmond. It was the scene of fierce fighting during the May 5, 1862, Battle of Williamsburg. Approximately one third of earthworks remain.

Battle of Williamsburg, Trails sign in front of the Park Inn, on Route 60, 7135 Pocahontas Trail in Williamsburg – This was the hottest spot during the May 5, 1862, battle that challenged the Confederate rear guard as that army withdrew from its Peninsula lines toward Richmond. This site, known as the “Bloody Ravine” was the focus of the seesaw fighting that resulted in a draw. The Confederates continued their withdrawal that evening.

Wren Building, Williamsburg, College of William and Mary campus – Built in 1695. Confederate troops under Brig. Gen. Jubal Early camped here prior to the May 5, 1862, Battle of Williamsburg. The Wren Building was used as a hospital after the battle and was burned by Union troops in September 1862. (No Civil War Trails marker.)

For information about Lee’s offensive that resulted in a Union withdrawal back to the James River in June-July 1862, see the visitor center at the Richmond National Battlefield Park. s there will direct you to battle sites at Drewry’s Bluff, Beaver Dam Creek, Gaines’ Mill, Savage’s Station, Glendale and Malvern Hill. [More information in Richmond National Battlefield Park, Central Virginia].

This James River plantation was the final stop of McClellan’s Peninsula Campaign. It was here at Harrison’s Landing that the Union army licked its wounds under the cover of gunboats. The plantation’s history, dating to the 1600s, is highlighted. 9 am–5 pm daily. $10.50 adults. Nearby Westover, where only the grounds are open to visitors, was Union Fifth Corps headquarters. Trails sign near the parking lot.