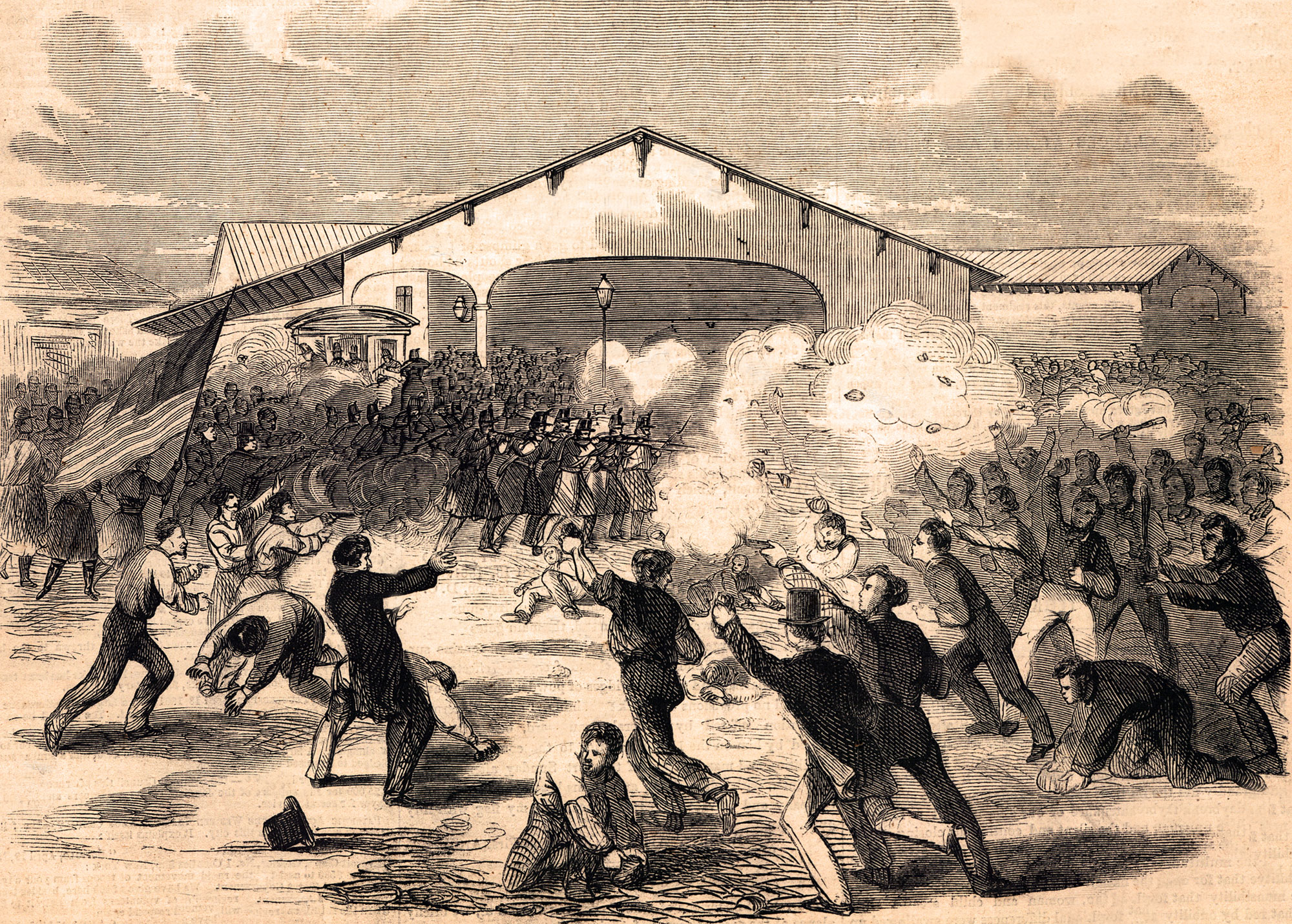 The Baltimore area found itself on the front lines of the Civil War almost immediately after the first shots were fired at Fort Sumter. Union troops rushing to the defense of Washington, DC just days after Sumter had to pass through the area where loyalties were, at best, questionable.

The tension erupted April 19, 1861, in Baltimore as Southern sympathizers attacked Federal troops. Union authorities moved quickly and decisively to secure the area, but the situation remained uneasy throughout the war. This Civil War Trails tour covers the Baltimore city story as well as area themes involving African Americans, the all-important railroads and a variety of activity on the northern shores of the Chesapeake Bay.

Baltimore was a growing, thriving city served by a navigable harbor and four railroads on the eve of the Civil War. It was also a city divided. Confederate sentiment was strong here. Abraham Lincoln received only 1,100 of more than 30,000 votes cast for president in 1860.

Fearing a plot against his life, advisers convinced Lincoln to travel in secret through Baltimore on his way to Washington. The ploy was seen by some as cowardly.

As war clouds gathered, troops from the north headed south to Washington. The first of those soldiers, from Massachusets and Pennsylvania, arrived in Baltimore April 19, 1861. Fighting broke out as the Union soldiers marched between Camden and President Street railroad stations. Accounts differ, but at least 10 soldiers and as many civilians were killed in the “battle” that some called “The Lexington of 1861” or the “Massacre at Baltimore.”

Order was restored, some Baltimore civic leaders were imprisoned, and Federal leaders imposed martial law on the city. But loyalties were never certain, and Baltimore spent an uneasy war.

For more on the city’s Civil War history, a good reference is Baltimore During the Civil War by Scott Sumpter Sheeds and Daniel Carroll Toomey. 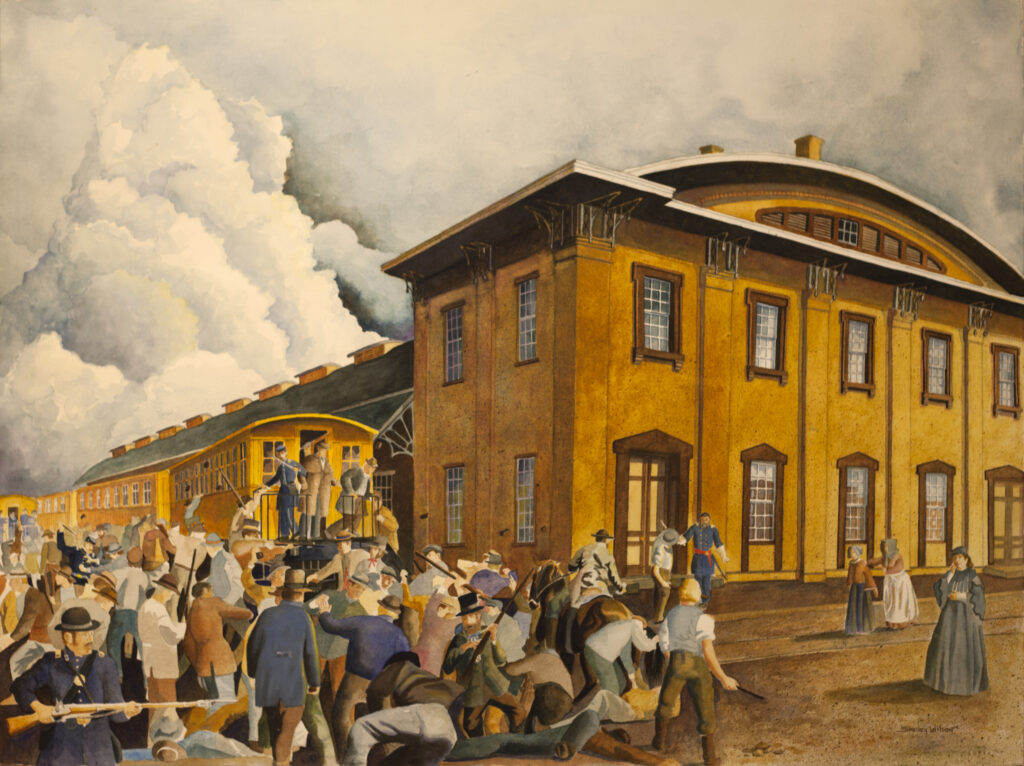 Six Civil War Trails interpretive markers trace the evolution of April 19, 1861, Baltimore “riot” that erupted when Union soldiers destined for Washington DC made their way from the President Street Station to the Camden Railroad Station. The Trail follows the fate of the 6th Massachusetts Regiment as the soldiers battled angry secessionists for two hours through downtown Baltimore.

This was the first bloodshed of the war following the surrender at Fort Sumter. Signs are located along President, Pratt and Howard streets in the city’s Inner Harbor area. For more information about the riot and the walking tour, visit the President Street Station Civil War Museum (see below) and the Baltimore Visitor Center located on the waterfront near Light Street.

USS Constellation
Pier 1, Inner Harbor
410-539-1797
ROAD MAP
This 1854 all-sail ship was the last such vessel built by the U.S. Navy and the only surviving Civil War-era ship still afloat. The Constellation patrolled the coast of Africa enforcing the slave trade laws, then protected Union merchant shipping from Confederate raiders in the Mediterranean and served in the West Gulf Blockading Squadron. Much Civil War interpretation on the three decks open to visitors. The Constellation is part of the “Historic Ships in Baltimore” ticket. Open daily with hours changed seasonally. $11/adult (one ship ticket).

Fort McHenry National Monument
and Historic Shrine
End of East Fort Avenue
410-962-4299
ROAD MAP
Plenty on the Civil War here in the place better known for the inspiration for Key’s “The Star Spangled Banner.” The late 18th-century fort was a prison for Confederate soldiers and sympathizers during the war. 8 am–4:45 pm (extended to 7:45 pm during the summer). $7/adult.

The following sites are interpreted by Civil War Trails signs: 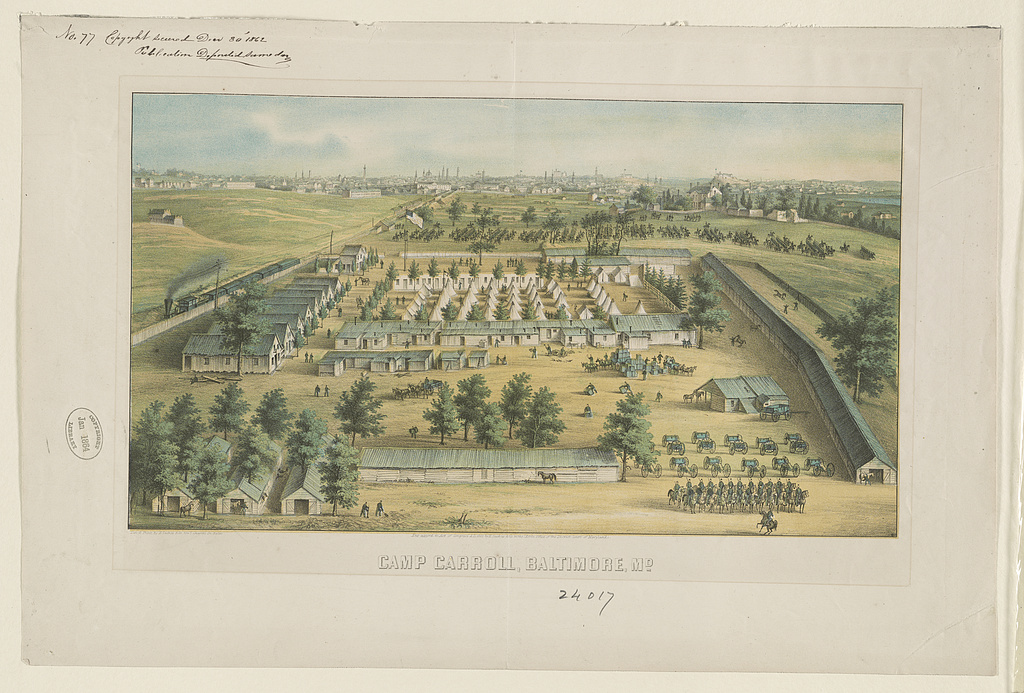 Mt. Claire Mansion (Camp Carroll)
Trails sign in Carroll Park on Washington Blvd. –
By the summer of 1861 the Union army had established camps throughout Baltimore. Camp Carroll, established here on land that was once the 18th-century plantation of Charles Carroll, was used as a training facility throughout the war.

Federal Hill
Trails sign located in the park overlooking the Inner Harbor
Spectacular view of downtown Baltimore and the Inner Harbor area here. The commanding position attracted Union guns to subdue and intimidate the city in 1861. The hill was occupied continuously during the war.

Crimea Mansion
Trails sign in Leakin Park (between Baltimore and Lombard streets west of downtown) at the mansion house
When Union troops occupied Baltimore in 1861, orders were issued to arrest the owner of this estate, Ross Winans. The Federals cut down an orchard and burned the trees as firewood but did not find Winans. He was arrested later at Relay on his way back from an emergency session of the Maryland legislature in Frederick. He was the first of many civilians arrested in Maryland.

Druid Hill Park
Trails sign near main gate of park, near intersection of North and Madison Avenues, north of downtown
Union soldiers camped here near the main gate of the then new park beginning early in the war. The location became a main organization point for units of the United States Colored Troops.

B&O Railroad Station Museum
Main Street and Maryland Avenue
410-461-1945
This landmark, known as the oldest railroad station in America, focuses on the early years of the B&O Railroad. Civil War exhibits examine the importance of the railroad to the area and to the Union during the war. Open Wednesday–Sunday 11 am–4 pm. $5/adult.
A special Civil War program, highlighting the life and times of area citizens during the war, is offered at the station Feb. 14–June 21, 2009.

The following sites are interpreted by Civil War Trails signs:

Thomas Isaac Log Cabin (Ellicott’s Mills)
Trails sign at off Main Street east of Ellicott Mills Drive
Like much of this area of Maryland, this town of 2,000 suffered divided loyalties as the war began. Residents joined both sides, each fighting under the Maryland flag. Even the children engaged in mock battles in town. 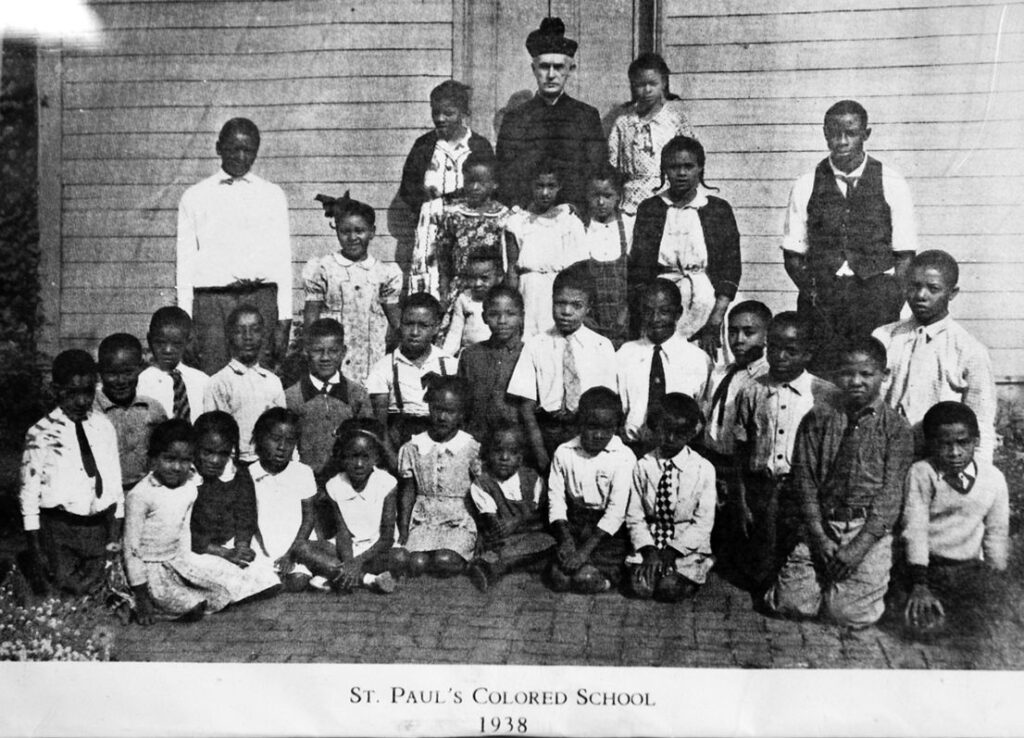 Trails sign located off Main Street west of Ellicott Mills Drive
Surviving members of the United States Colored Troops founded this school in the 1880s. Sign here honors local hero Decatur Dorsey, one of 16 African-American soldiers to win a Medal of Honor during the Civil War (for action at the Battle of the Crater near Petersburg, Va.)

Savage Mill
Trails sign southwest of Baltimore off Route 1 south of Route 32
The mills located here manufactured canvas for tents and other uses by the Union army. Its location on a spur of the B&O Railroad made the town a strategic spot, especially early in the war as Union troops struggled to get to Washington.

Landsdowne Christian Church
101 Clyde Ave., Baltimore
This church, with many memorial stained glass windows, was built in 1905 to honor Union soldiers and was the local focus of Memorial Day activities through the early 20th century. To get there: Take I-695 Exit 9 East, Hollins Ferry Road, toward Lansdowne. From Hollins Ferry Road, turn left on to Hammonds Ferry Road for about 1/2 mile. Turn right onto Clyde Avenue and proceed one block. The marker is to the left of the front door.

Elkridge Furnace Inn
Follow the Trails signs from Route 1 in Elkridge to sign on Furnace Avenue
In May 1861, Union troops occupied the area, protecting the nearby Thomas Viaduct, a vital railroad bridge over the Patapsco River. Losing the bridge meant losing the link between Washington and the North.

Oakland Manor
Trails sign at site off U.S. 29, follow the signs southwest of Baltimore
A local militia group made up of landed gentry drilled here before the war, many later joining the Confederate army. Many of the slaves who worked here later served in the United States Colored Troops.