Significant areas of four major battlefields plus a handful of historic buildings are maintained in this large park. More than 100,000 men became casualties in the fighting in and around Fredericksburg, making it perhaps the bloodiest piece of ground in the country.

Fredericksburg battlefield – The visitor center is just steps away from the famous stone wall at Marye’s Heights that was successfully defended by Confederates Dec. 13, 1862. Short self-guided walking tours along the wall and up to Confederate positions on the heights are available. The National Cemetery is located just above the center. A driving tour with several stops takes visitors through the lesser-known Prospect Hill area of the battlefield on the Federal left.
Animated map from Civil War Preservation Trust

The visitor center here is located just off Route 3 about 10 miles west of Fredericksburg. Stop there for information about this site, scene of intense fighting in early May, 1863. Stonewall Jackson was severely wounded May 2 at a spot marked near the visitor center. The famous general died about a week later. This battle is regarded by many as Robert E. Lee’s greatest victory. A driving tour highlights significant areas. Visitor center open 9 am–5 pm daily.

Civil War Trails sign describing the action early on May 1 located just off the westbound lanes of Route 3, 0.07 miles west of Route 626.

Short interpreted trail highlights the fighting May 1, 1863, the first day of the battle.

Interpretive wayside tells the story of the May 3, 1863 attack by Confederate Gen. Alfred Colquitt on Union troops heading for the Rapidan River ford during the Battle of Chancellorsville.

An exhibit shelter (manned during the summer) helps explain the action here May 5–6, 1864, as Federal soldiers pushed forward in what would become the Overland Campaign. A short walking tour from the shelter routes visitors through Saunders Field, one of the most fought-over areas in the battle. Ellwood, a plantation home, became a Federal headquarters during the battle and is open daily during the summer and on weekends from late spring to early fall. It’s also the burial place of Jackson’s arm. Exhibit shelter staffed seasonally. See nps.gov/frsp/planyourvisit/hours.htm for hours.

Another exhibit shelter (manned during the summer) highlights the fighting as the Army of the Potomac and the Army of Northern Virginia slugged it out in mid-May 1864. Among the short walking tours in this park unit explores the Confederate salient that became known as the “Bloody Angle.” Exhibit shelter staffed seasonally. See nps.gov/frsp/planyourvisit/hours.htm for hours.

Caroline County between Fredericksburg and Richmond, watch for the signs along I-95
804-633-6076
Jackson died here May 10, 1863 following his wounding at Chancellorsville. Site is staffed seasonally. See nps.gov/frsp/planyourvisit/hours.htm for hours.

Great views of the city from here, a Federal position during the 1862 fighting. Restored rooms in the Georgian mansion and exhibits tell the story here. Open daily 9 am–4:30 pm.

1844 church was site of fighting during the Chancellorsville campaign and a refuge for Fredericksburg citizens in 1862.

A 1.75-mile walking trail with interpretive signs covers the site of an 8,000-man Union attack south of Fredericksburg Dec. 13, 1862, battle there. The area is known as the “Slaughter Pen Farm” because the soldiers advanced with little or no cover against strongly positioned Confederates on high ground (Prospect Hill) and sustained heavy casualties. This was supposed to be the main Union attack that day, followed by the more famous (now) assault at Marye’s Heights. The land has been preserved by the Civil War Preservation Trust (CWPT).

The Trust asks that groups of five or more register before going on the site, still an active farm. Call 800-298-7878. See www.civilwar.org for a virtual tour of the property.
Related sites: Pelham’s Corner (just south on Route 2) and Prospect HIll area of the Fredericksburg and Spotsylvania National Military Park.

Interpretive signs located southwest corner of Route 2 and Benchmark Road south of downtownThis is the spot where Confederate artillerist John Pelham shelled the Federal flank as it advanced toward the Southern line during the December 1862 Battle of Fredericksburg.

A walking tour of an often overlooked area of the Frederickburg battlefield focuses on Kenmore, the 1775 home of Fielding Lewis and his wife Betty Washington Lewis (George Washington’s sister). The tour includes Kenmore’s grounds with views of a cannon ball imbedded in the mansion’s walls and stories about its use as a hospital in December 1862. A short walk covers Civil War action along and below Washington Street. Stops include the Mary Washington Monument and the Confederate Cemetery. Pick up a free tour map/brochure at Kenmore. Request a copy by writing Kenmore.

Signs with contemporary photographs describe the action at this critical spot on the Union attack route to Mayre’s Heights Dec. 13, 1862. Among the topics are landscape features still visible and the site of an old canal (now Kenmore Avenue) that soldiers crossed during the attack.

Downtown museum devoted to area history including the Civil War. Highlight is a Confederate flag that flew over the city during the 1862 battle.
Open noon-5 pm Monday, Thursday-Saturday and 1-5 pm Sunday (March-November). Shortened hours in December. Closed January-February. $7/adult.

The site of one of the Federal pontoon bridges constructed under fire in December 1862. Located at the east end of Sophia Street at the Rappahannock River. Civil War Trails interpretation.

Interpretive marker and a monument to the 7th Michigan Vol. Infantry at the site of one of the Union pontoon bridges used to cross the Rappahannock River during the battle. 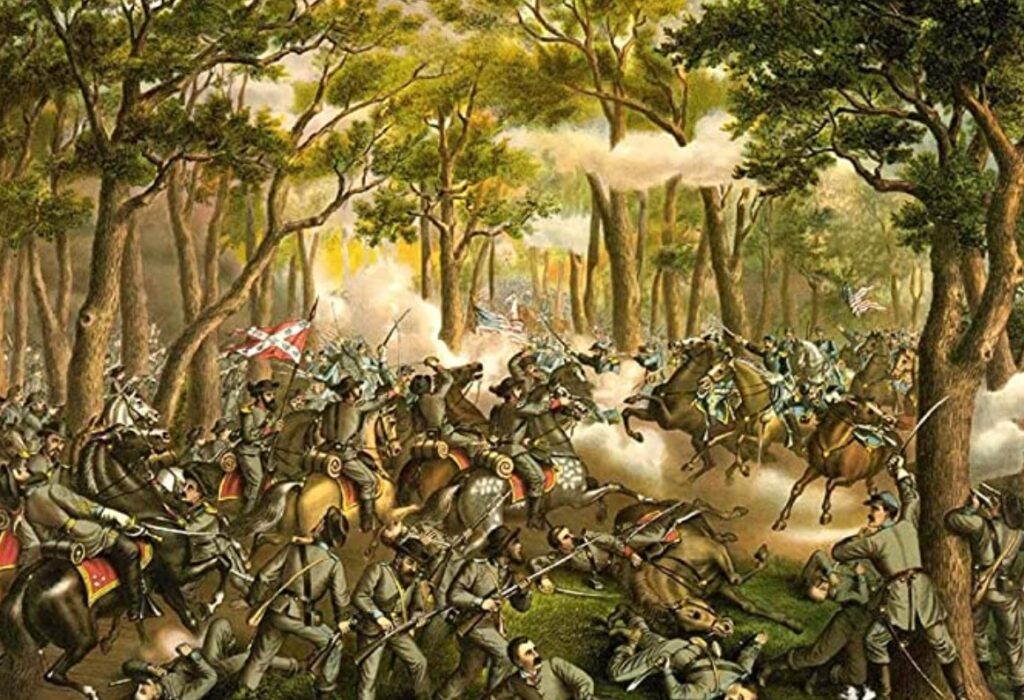 This 41-acre county park encompasses preserved features of a fortified campsite used by the Union Army of the Potomac the winter of 1863. Paved park roads lead to five interpreted stops including hut sites and remains of battery earthworks that once guarded the camp. Short walking trails explore the trace of an old corduroy road running through the site, the remains of a 1780s quarry and a stone bridge. Open 8 am-8 pm mid-March-October. (Closes 5:30 pm other times.) Free.

Great presentation of primarily local artifacts found at camp sites in the area. Some rare military and personal items are on display. Soldier huts replicated in a demonstration of Union camp life in Stafford County. Wednesday–Sunday, 9 am–5 pm. $3/adult. 540-371-4234. A Civil War Trails marker outside the museum describes White Oak Church across the road, which was the center of much activity during the Federal “occupation” in the winter of 1862.

Federal troops, occupying the area early in the war, ripped out the woodwork and wrote on the walls of this historic Presbyterian Church. Confederate cavalry captured a group of inattentive Union troops here Nov. 28, 1862. Trails sign.

Some of the heaviest fighting of the war occurred in Spotsylvania County, south and west of Fredericksburg. The Overland Campaign began when Union troops crossed the Rapidan River into the county in May 1864. Stonewall Jackson sustained injuries that later proved fatal during the vicious fighting near Chancellorsville in 1863. For more on these battles, see the listings on this page. For more on the national parks in the county, see nps.gov/frsp. For county sites involved in the Civil War Trails “Lee vs. Grant” Overland Campaign tour.

The history of the county since 1722 traced here with special focus on the Civil War. The exhibit “17 days in May,” is devoted to the 1864 battles in the county with emphasis on the local experience. Open Wednesday–Monday 9 am-5 pm. Free.

See the 1864 Overland Campaign tour for more information about Caroline County’s Guinea Station, Bowling Green and Carmel Church. Also noted on a state historical marker on US Route 301 about 9 miles north of Bowling Green is the site of the Garrett Farm where Lincoln assassin John Wilkes Booth was cornered.