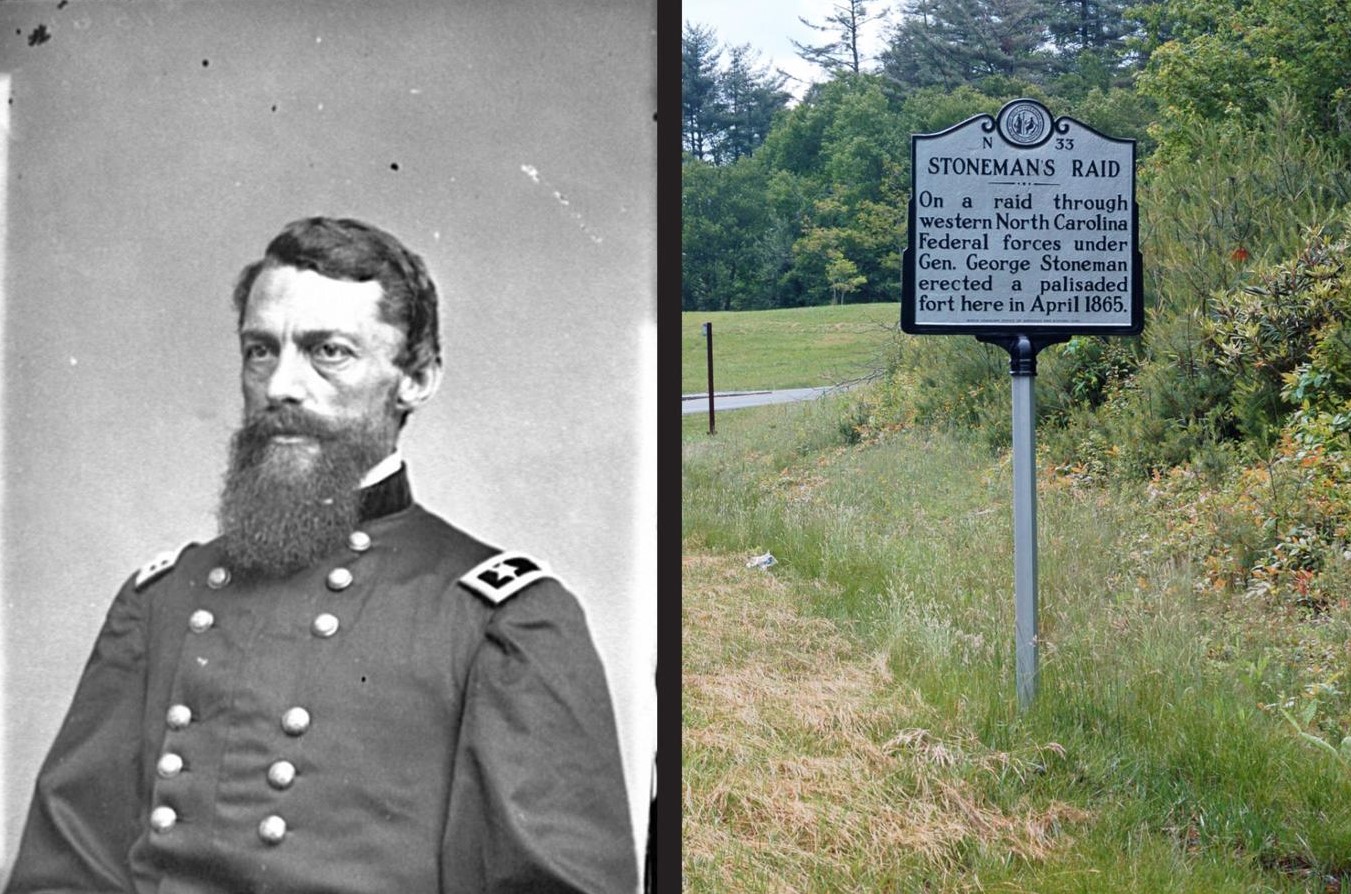 Compared to the big set-piece battles elsewhere, the events that unfolded in the western part of North Carolina might seem small. But some of the meanest, most interesting and most personal stories of the war are coming into focus through the Civil War Trails program here. Tales told in the novel Cold Mountain are brought to real life with Trails signs describing deadly guerilla warfare, renegade camps made up of deserters from both sides, and even a Cherokee chief. The war divided neighbors and families so deeply that animosity continued through generations.

The relatively flat areas east of the mountains hosted logistical support for Confederate armies elsewhere. Hospitals, ironworks, a large prisoner-of-war camp and other behind-the-lines activities flourished in the area during the war.

Regular military operations rarely ventured into the western parts of the state, but Union Gen. George Stoneman came raiding in the area in the last months of the war, leaving in his wake destroyed ironworks, warehouses and other Confederate infrastructure.

On March 25, 1865, Union Gen. George Stoneman led 6,000 cavalrymen from Tennessee into western North Carolina and southwestern Virginia to disrupt the Confederate supply lines, destroy mines and ironworks and to free prisoners at Salisbury.

He then headed west encountering limited resistance from scattered Confederate forces. Stoneman was in or near Asheville April 26 when Johnston surrendered near Durham. Many of the Union troopers then returned to Tennessee while others pursued Jefferson Davis.

The following sites are part of the Stoneman’s Raid story. More Trails signs are planned; check back here for updates.

Trails sign located one block east of Route 321 in Patterson

Elements of Stoneman’s Raiders burned the mill here on March 30 because it reportedly had supplied Confederate soldiers with uniforms and other goods.

A detachment of Stonemans cavalry under Col. William Parker found cooperation, food and shelter here April 1, 1865. Because of the help he found here, Palmer spared this mill.

Trails sign located at the York Tavern in Rockford

Stoneman’s Raiders passed through here April 1–2 on their way to Virginia. Some troopers stopped long enough to harass citizens and create many local stories about the event.

Stoneman’s raiders passed through here April 1, 1865, destroying scientific equipment at the Jonesville Male and Female Academy but overlooking the school’s bell. The bell still rings at the First United Methodist Church. Trails sign located at the visitor center just west of I-77 on Route 67.

Trails sign located on the Yadkin River in Siloam

While moving through the area April 1–2, Stoneman’s cavalry encountered armed resistance from Confederate Maj. Richard Reeves and a colonel who was recuperating in the major’s house. The two Southerners fled after killing a Union trooper and escaped. Stoneman’s men tried to burn the house but were unsuccessful.

Union raiders rode three abreast down a narrow dirt road here on a path of destruction. Local residents reported that the troopers burned “everything along the way.”

On April 11, 1865, the raiders surprised and scattered a few home guard here before pillaging and burning several buildings. A Union sympathizer in town, however, fed more than 100 Union troops.

Davie County in the Civil War:

On April 11, part of Stoneman’s force crossed the Yadkin River near here en route to Salisbury. A 21-member Southern Home Guard unit assembled just north of Mocksville and exchanged a few shots with the Federals. Stoneman’s men burned and pillaged, destroying some county records. The local townfolk were forced to feed the soldiers.

North Carolina’s governor when the war broke out, John W. Ellis, was the first judge in this 1855 Greek Revival-style structure. The building escaped destruction when Union Gen.

George Stoneman raided the town on April 12, 1865. He burned vast quantities of military stores plus the by-then-evacuated prison site.

Trails sign located at the Iredell County Courthouse in Statesville

Following the destruction of what was left of the Confederate prison and supply dump at Salisbury, Stoneman led his raiders west toward Tennessee, arriving in Statesville April 13. His men burned supplies and the railroad depot and allegedly mistreated some residents. Gov. Zebulon Vance was arrested here during the raid after fleeing from Raleigh. He was transported to prison in Washington DC.

On April 17, part of Stoneman’s force overcame Confederate homeguard (and Gen John P. McCowen on leave) at Rocky Ford, then moved into Morgantown. Local residents charged that the Union troopers plundered private property and wreaked havoc on the local population.

McDowell County, Trails sign on US 70, a half mile west of Marion town limits

An element of Union Gen. George Stoneman’s cavalry raiders skirmished briefly with home guards here April 19, 1865; then “were swarming in and around the house.” After plundering the home and scaring the family, Stoneman moved on toward Asheville.

Stoneman and part of this raider force spent Easter weekend here April 15–17. Some looting and the townfolk suffered a scare. About 900 prisoners were kept in this churchyard during the weekend with the sanctuary used as a hospital.

Elements of Stoneman’s raiders occupied Morganton April 17 after a brief skirmish at Rocky Ford. The Union troopers, aided by former slaves and Union sympathizers out for revenge, ransacked the town.

Confederate Home Guard turned back elements of Stoneman’s raiders at Royal Gorge visible from here. On April 20, 1865, local Southerners blocked the road in the gorge with felled trees and other obstructions, causing the Union raiders to end their advance on Asheville (at least through here). The raiders detoured from here, however, and found another — much longer — way into the city.

Trails sign located in front of the Norris Library, one block south of the Rutherford County Courthouse on Main Street

Part of Union Gen. George Stoneman’s raiders pushed through here. Some of the Union soldiers were from the region and decided they would settle some scores against their Confederate sympathizer enemies while in town.

A hungry detachment of Stoneman’s Raiders stopped at this early 19th-century home late in April before moving on to Columbus. According to family tradition, Union horses entering the house left hoof prints on the parlor floor.

A company of the 16th NC Infantry mustered here at the courthouse April 20, 1861, but the county’s population was divided on the war with many draft evaders later fleeing to the mountains. Stoneman’s raiders came through April 22 after the Confederates blocked progress at Swannanoa Gap.

Trails sign located on Route 74A in the Chimney Rock Village

Word of Confederate Gen. Joseph Johnston’s surrender at Durham (April 26, 1865) reached Union Gen. George Stoneman’s raiders near here along with news of Confederate president Jefferson Davis’s flight through North Carolina. Troops camped here were ordered to pursue Davis, which they did until he was captured in Georgia.

Union Col. Palmer, commanding one of Gen. George Stoneman’s brigades of cavalry, made his headquarters here at Sherrill’s Inn on April 27, 1865, after the capture and pillaging of Asheville the previous day. He was promoted here to general and took command of two of the Union brigades in the area. Earlier, an Underground Railroad operated through Hickory Nut Gap, helping escaped Union soldiers and slaves travel to freedom in Tennessee.