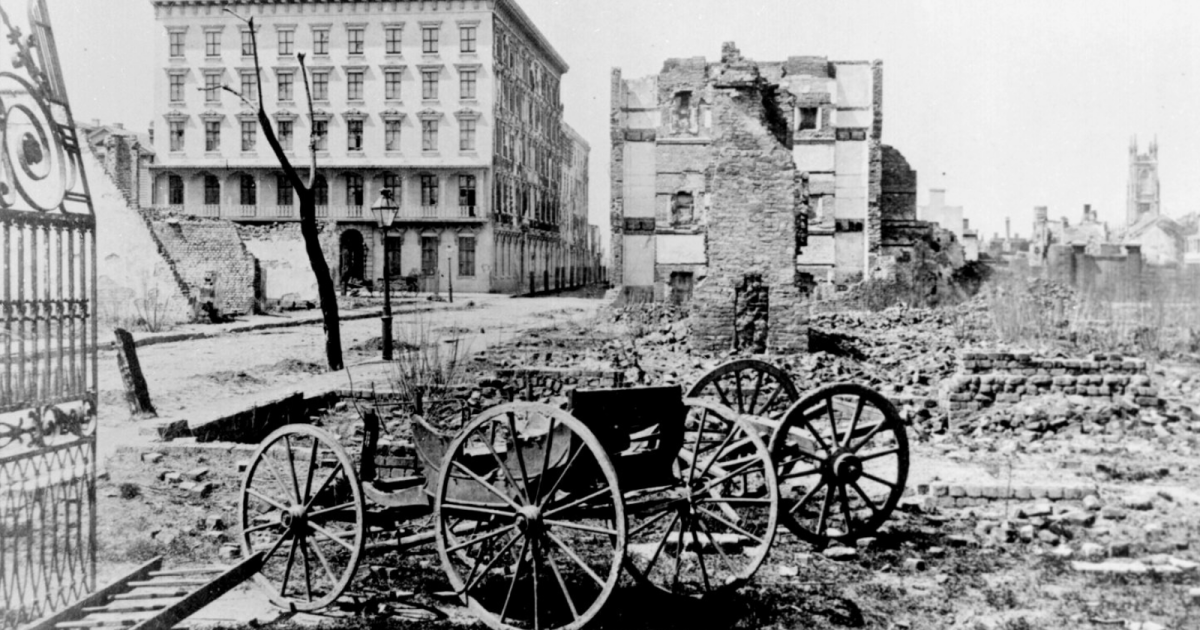 Many know the story of the secession fever that gripped the state and the city, resulting in the signing here on Dec. 20, 1860, the document that took South Carolina out of the Union.

And most can tell the story of the first shots fired at Fort Sumter a few months later. But Charleston’s Civil War story didn’t end in the spring of 1861.

Many serious Union attempts were made to capture or cut off the city, which became one of the leading ports for blockade runners. Battles on land and sea were fought within a few miles of the city’s famous waterfront. But the Confederates managed to hold Charleston until February 1865, suffering periodic shelling from long-range Union guns.

Despite the bombardment and a great wartime fire, much of the city’s historic fabric remains. The old neighborhoods in Charleston offer one of the best walking experiences in the country. Streets are lined with antebellum homes and historic churches, most having some association with the city’s Civil War history. Fort Sumter is always visible from the waterfront promenades where, more than 140 years ago, people watched the war begin.

Begin your visit at the main visitor center. It’s open 8:30 am–5:30 pm (closing 30 minutes earlier during the winter). Pick up walking tour and other information there. Catch one of a variety of paid tours and shuttles waiting at the center. 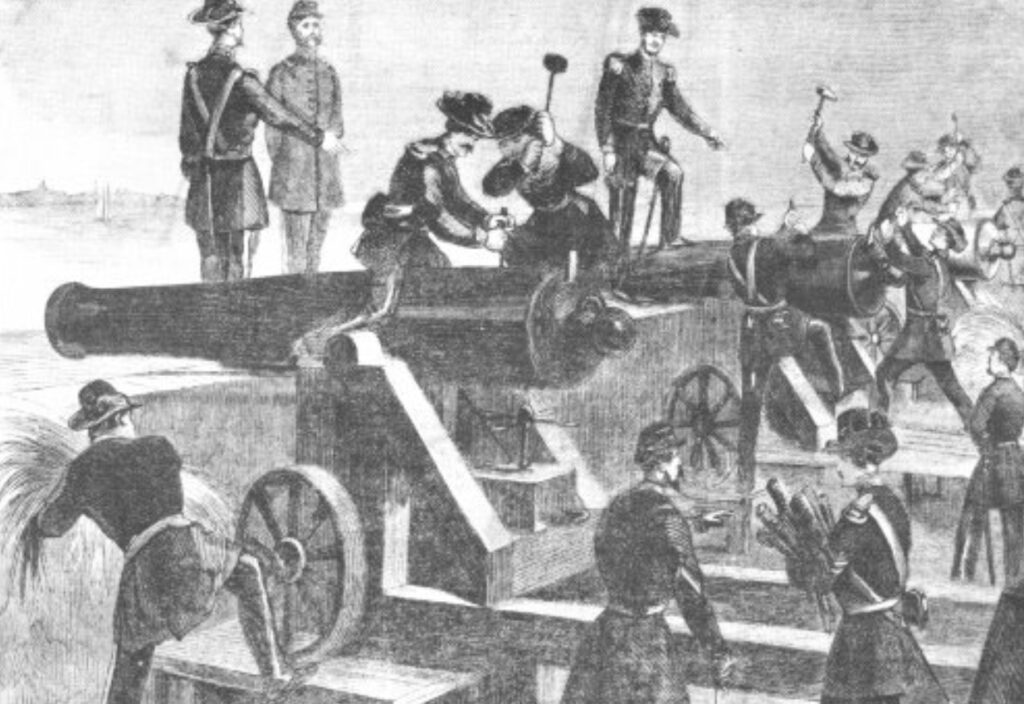 Years of sectional differences and months of high drama finally boiled over when, during the early-morning hours of April 12, 1861, Confederate gunners fired the first shots of the Civil War at this Union bastion in the middle of Charleston Harbor. After 34 hours of pounding, the fort’s commander, Maj. Robert Anderson, surrendered. The victorious Confederates occupied, using the strategic location to keep the Union navy from the harbor and to protect blockade runners. After an unsuccessful Union attempt to bypass the fort by water, Union land-based guns were brought within range, eventually pounding Sumter into rubble.

The advance of Union Gen. William T. Sherman forced the Confederates to evacuate the fort Feb. 17, 1865.

To visit: The fort lies more than 3 miles from downtown in Charleston Harbor, so it can be visited only by boat. Catch a National-Park-Service-authorized shuttle to the fort. The two-hour, 15-minute, cruise includes a tour of the harbor and a one-hour visit to Fort Sumter. The tour boats leave three times daily from each of two locations during the summer months, with a more limited schedule during the winter. Find tour schedule and fees on fortsumtertours.com.

To get the most from your one-hour visit, catch the Sumter shuttle at the new downtown Education Center. A large parking deck is available a block away. Exhibits at the Center examine the growing national crisis and the increasingly strident arguments over slavery that led to secession and the first shots. Bookstore. The Education Center is open 8:30 am–5 pm daily and is free.

Moultrie One of the key spots guarding Charleston Harbor, forts have been located on this site since the Revolutionary War. Deemed indefensible, the Union garrison abandoned Fort Moultrie after South Carolina seceded in December 1860, moving to Fort Sumter. A few months later, Confederates occupying the fort joined in the bombardment that opened the Civil War. Self-guided tours. Open 9 am–5 pm daily. $3 adults. Administered by the Fort Sumter National Monument. 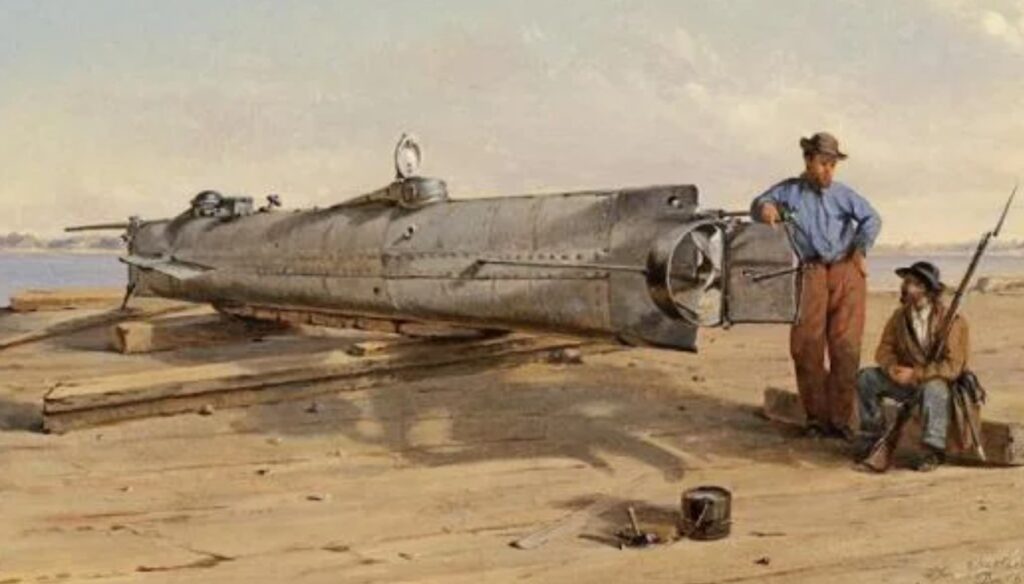 On Feb. 17, 1864, the Confederate submarine H.L. Hunley slipped into Charleston Harbor, its crew hand-cranking the cigar-shaped vessel toward Union ships blockading the port. Later that night the Hunley managed to spear the USS Housatonic with an explosive device, sinking the huge Union warship. Mystery surrounds what happened next.
After signaling toward shore, the Hunley disappeared, not to be seen again for more than 130 years.

Author Clive Cussler discovered the Hunley in 1995. It was raised carefully amid much ceremony and celebration in 2000. Today, the famous Confederate sub is undergoing painstaking conservation in Charleston. Many artifacts and remains of the eight-man crew have been removed.

All three crews who manned the Hunley are buried in Magnolia Cemetery (see listing below).

The public is invited to view the Hunley (weekends only, 10 am–5 pm Saturday, noon–5 pm Sunday) as it undergoes conservation. Visitors to the Conservation Center see exhibits and films describing the history of the submarine and its recovery. Objects recovered from the wreck include the $20 gold piece carried by Lt. George Dixon, commander of the Hunley. A large shopping area features Hunley-related clothing and other items.

Admission is $16 plus a service fee, and reservations are strongly recommended. It’s well worth it. A few walk-up tickets may be available. Review dates for the timed tours, get directions to the Lasch Center and learn about the history and recovery of the Hunley at the website. For more information, contact the Friends of the Hunley, 1250 Supply St., Building 255, Charleston SC 29405.

There is more information about the Hunley, including full-size models, at both the Charleston Museum and the South Carolina State Museum in Columbia. See also Magnolia Cemetery below.

Founded in the 1700s, this museum features exhibits covering a wide variety of Charleston and Low Country history including an excellent Civil War section. The Civil War exhibit, “City Under Siege,” examines the crisis that led to South Carolina’s secession (decided in Charleston) and the subsequent firing on Fort Sumter. Using maps, artifacts and illustrations, the displays also outline Charleston’s troubled journey through the rest of the war as Confederate defenses were tested by various Union attempts to capture the city. The bombardment of the city by Union batteries is described. A special section on the CSS Hunley is offered, and a life-sized model of the submarine is located near the museum’s front entrance. This is an excellent place to get oriented to a Civil War visit to Charleston. Open 9 am–5 pm Monday–Saturday, noon–5 pm Sunday. $12/adult.

Secessionville Union forces attacked Charleston’s outer defensive line on James Island June 16, 1862, hoping to capture the island’s forts and gain favorable positions for bombarding the city or even capture it. Confederates at this strongpoint at Fort Lamar managed to repel the attack. A short self-guided walking tour covers the remains of the fort and the battle history. The site is open daily dawn to dusk.

To get there: From Charleston, take Route 17 to James Island then south on Folly Road. Look for the Fort Lamar sign, turn left onto Grimball Road. Turn right after sign on Secessionville Road, then left at sign onto Fort Lamar Road. Entrance to the site is 0.8 miles on left.

Beautiful 1850 cemetery with plenty of atmosphere is the location of the graves of more than 2,200 Civil War veterans, 14 signers of the Ordinance of Secession, and 84 Confederate soldiers moved here from the Gettysburg battlefield. The crews of the Confederate submarine H.L. Hunley — now including the men from the sub’s final mission — are located in a special section. Pick up a useful map at the office during business hours. Gates open 8 am–5 pm daily. Office hours: 9 am–4 pm Monday–Friday.

Located in the stately 1841 Market Hall, this museum takes an old-fashioned and uneven approach to the display of some incredible items such as the first Confederate flag to fly over Fort Sumter and the first “secession” flag to fly over the city. Items from the Secession Convention and uniforms and other artifacts are also on display. Atmosphere alone is worth the admission fee. Open 11 am–3:30 pm Tuesday–Saturday. $5 adults.

Tells the story of the famous institution from its founding in 1842. One exhibit highlights the Citadel Cadets who fired shots at the USS Star of the West, turning the ship back as it attempted to resupply Fort Sumter in January 1861. Open Sunday–Friday 2–5 pm; Saturday noon–5 pm. Free.

An array of authentic Civil War guns marks the spot where Confederate cannon were mounted on the downtown waterfront. The guns here constituted the city’s last line of defense.

The distant Fort Sumter was out of range from here, so the guns here were not used in the bombardment. Union artillery on Morris Island was able to reach downtown Charleston and caused much concern and damage in this area during the last two years of the war.

What about Battery Wagner?

Located on Morris Island at the entrance to Charleston Harbor, Fort Wagner was key to the Confederate defense of the city. Union forces began a series of attacks against the fort in July 1863 that featured a furious night assault that included the 54th Massachusetts Infantry black soldiers made famous in the movie “Glory.” The Confederates held the fort itself, but Union gunners were able to maneuver close enough to bombard both Sumter and the city effectively. The most famous weapon used by Union gunners here was the “Swamp Angel” that fired 36 huge projectiles into the city.

A historical marker on Morris Island locates the site of the “Swamp Angel.” However, the site of Fort Wagner has been washed away into the Atlantic Ocean, and access to Morris Island is limited and only by private boat.