Tidewater museums and visitor centers are listed separately here. All of the following are marked with Civil War Trails signs unless noted.

Two members of the 36th U.S. Colored troops are buried here. Both Edward Diggs and Anthony W. Poole served in the unit that participated in the Battle of New Market Heights near Richmond (Poole was wounded in that battle) and was part of other fights around Richmond and Petersburg. The men of the 36th were among the first Union soldiers to enter Richmond after its fall April 3, 1865.

Driving tour covers sites around the city including Fort Norfolk, historic districts, the site of Abraham Lincoln’s 1862 “landing,” and others. Brochures available at the city visitor center or call 800-368-3097. See also the city’s interpreted “Cannonball Trail.”

Originally built in 1794, this interesting fort was occupied by both Confederate and Union forces during the war. Entry to the grounds is possible during business hours Monday-Friday. Tell the guards you want to see the fort, show ID, and they will let you in.

Rare monument to African-American soldiers who fought in the Civil War memorializes black soldiers buried in the West Point section of the Elmwood Cemetery. 757-441-2576.

See also the museum/visitor center listings for the Hampton Museum and the Casemate Museum.

Strategically located at the entrance to Hampton Roads, Fort Monroe’s history spans centuries. The Union maintained control of the fort throughout the Civil War and never was seriously threatened. In 1861, Union Gen. Benjamin Butler announced his policy of harboring escaped slaves here, calling them “contraband of war.” The next year, Gen. George McClellan launched the Peninsula Campaign from the fort. The NPS took over the fort in 2011 and it’s a work in progress. Watch the website for ranger tours of the site.

Trails sign on the Hampton University campus – African-American students, many freed by Union Gen. Benjamin Butler’s “contraband” declaration early in the war, listened here as the Emancipation Proclamation was read in 1863. Many schools were established for the newly freed people in the area during the war.

Trails sign in Phoebus, Route 143 just before the bridge to Fort Monroe

The first U.S. Army camp on post-secession Virginia soil was established here in May 1861, under the protection of the Fort Monroe guns.

This historic church, built in 1728, was burned during the Confederate evacuation of the city Aug. 7, 1861. Much of the city burned that day on orders of Confederate Gen. John B. Magruder. The walls of the church remained, however, and services were held in the rebuilt church in 1869.

The Civil War-era courthouse at this site was one of the buildings burned during the Confederate evacuation of Hampton, Aug 7, 1861. The grounds later became a Union headquarters during the Peninsula Campaign and a Freedman’s school.

Hampton, A Sacrifice to War

Fearing a permanent Union occupation of Hampton, Confederate Gen. John B. Magruder ordered the town burned. The order was carried out Aug 7, 1861, resulting in the town’s destruction. Only the charred walls of St. John’s Church remained.

Trails sign is at the site of one of the houses burned by Confederate forces Aug 7, 1861. Archaeology reveals evidence of the conflagration and the re-use of bricks by Union soldiers to build temporary shelters.

Both sides licked their wounds after the famous Battle of the Ironclads March 8–9, 1862. The CSS Virginia returned to drydock and Union ships, including the USS Monitor, prepared for her return in Hampton Roads. The Virginia did return April 11, but the Union fleet did not engage. Two Union ships were captured by the CSS Jamestown near here during the encounter.

The Civil War in Mathews County

Several Confederate units were mustered here during the war and some individuals rose to prominence. James Henry Lane, born in Mathews County, rose to brigadier general in 1862 and served until the surrender at Appomattox. Sally Tompkins operated the successful Robertson Hospital in Richmond. Capt. Tompkins was the only woman holding a commission in the Confederate army. Navy units operated against Union shipping from Mathews County, which resulted in several Union operations against the raiders. The proximity of the Union navy allowed many escaped slaves to find freedom in Federal service.

Trails signs guide visitors through the remains of Fort Nonsense, constructed by slaves in 1861. The fort was built to obstruct access to the Confederate capital at Richmond from the Chesapeake Bay. The fort was never attacked. Trails signs at the site describe the fort’s design and construction and Union incursions in the area.

Best known for the internationally famous Colonial Williamsburg, the town also was the site of dramatic Civil War events, including the May 5, 1862, battle during the Peninsula Campaign. Confederate fortifications, many of which are now open to the public, dot the outskirts of town. For an informative tour map, see www.williamsburgcc.com (click on Civil War).

Nice interpreted walking trail through this city park preserving a couple of Confederate redoubts on the Williamsburg line. Attacked by Union forces May 5, 1862.

Located at the strategic crossing of the Albemarle and Chesapeake canals. During the war’s early stages the Confederacy benefited from the link. Following the fall of Norfolk, Great Bridge fell into Federal hands.

A monument to the “Jackson Grays” honors the regiment formed in the churchyard.

Home of William Wallace, first lieutenant of the “Jackson Grays.” Within view of this homesite is the large antebellum house “Beechwood,” home of the Stewart family.

This canal is the oldest operating artificial waterway in America. It provided the Confederacy with an important link between the Chesapeake Bay and the North Carolina Sounds until May 1862, when it was captured by Union troops.

A 50-building village, an important link on the Great Dismal Swamp Canal.

A concentration of men who fought with the United States Colored Troops are buried with honor in this small cemetery. Some of those interred here fought at “The Crater” near Petersburg and at New Market Heights near Richmond.

Take Route 168 south from I-64, then right at Old Battlefield Blvd then right on Ballahack Road, then 3 miles to site

The homes and final resting places of veterans of the United States Colored Troops are located nearby.

Used by Confederate and Union armies during the war. More than 300 Union sailors killed during the sinking of the USS Cumberland and USS Congress are buried on the grounds.

Trails interpretation on the waterfront.

A square mile of Revolutionary and Civil War-era structures. Includes the Peters House, headquarters for Union Gen. Benjamin “Beast” Butler; the Pass House (Crawford and London) where citizens had to obtain passes and swear allegiance to the United States; and the Confederate War Memorial (Court and High streets). Trails sign.

Engagements Jan. 31 and Feb. 1, 1864, resulted in the destruction of the Union gunboat USS Smith-Briggs.

Located along and near the James River and State Route 5 between Williamsburg and Richmond, each of the James River plantations, large and small, figured in Civil War history.

Berkeley and nearby Westover were the final stop in Union Gen. George McClellan’s campaign to take Richmond in the 1862 Peninsula Campaign. Thousands of soldiers camped on the banks of the river after the battle of Malvern Hill. Shots were fired at them from Evelynton’s “backyard.” The venerable Shirley Plantation hosted a hospital for a time. Sherwood Forest, home of President John Tyler, was damaged by occupying troops. A restored riverside fort at Wilson’s Wharf (Fort Pocahontas) on the Sherwood Forest grounds hosts an annual reenactment and is open for special events and pre-planned tours. 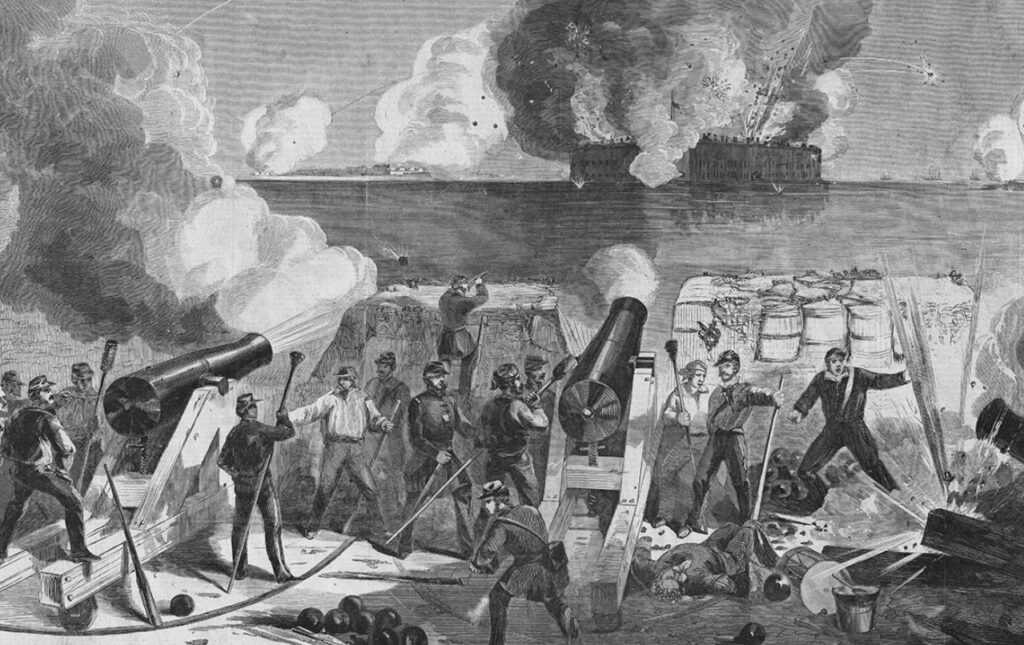 Although the main mission here is to interpret the Colonial history of Jamestown and Yorktown, there is much to interest Civil War visitors. Information about the 1862 siege of Yorktown is available at the visitor center there and a Civil War fort, partially built on the archeological remains of the original John Smith 1607 fort, is a prominent feature at Jamestown. Admission fee. Call 757-898-3400.

The area between the Rappahannock and Potomac Rivers is generally referred to as the Northern Neck. Route 3 is the major road.

This fine Virginia home on the Potomac River is the birthplace of Robert E. Lee. His cradle remains in place in one of the rooms. Site offers some Civil War interpretation. Call or visit website for hours. $10/adult.

A social center for more than 200 years, this tavern was once the home of Confederate Gen. William Mahone, hero of the Battle of the Crater and able railroad executive. Confederate troops camped here during the war and the building was used as a hospital.

Battle of Franklin and Franklin During the War

A series of Trails signs is located at the Blackwater River in downtown Franklin near Main and South streets; follow the Trails way-finding signs when in town

This regional transportation hub and commercial center became a central Confederate supply center early in the war. In 1862, Confederates constructed a series of earthworks that ran from the river here to Zuni Station, 50 miles north. Union gunboats came up the Blackwater several times in 1862 including a serious combined army-navy attempt to capture the town on Oct. 3. Confederates were able to repel that adventure, and the town continued its important supply role throughout the war.

This is the birthplace and boyhood home of prominent Union Gen. George Thomas who would earn the nickname of the “Rock of Chickamauga” during that Georgia battle. His choice to remain with the Union army caused family discord and he never returned home.