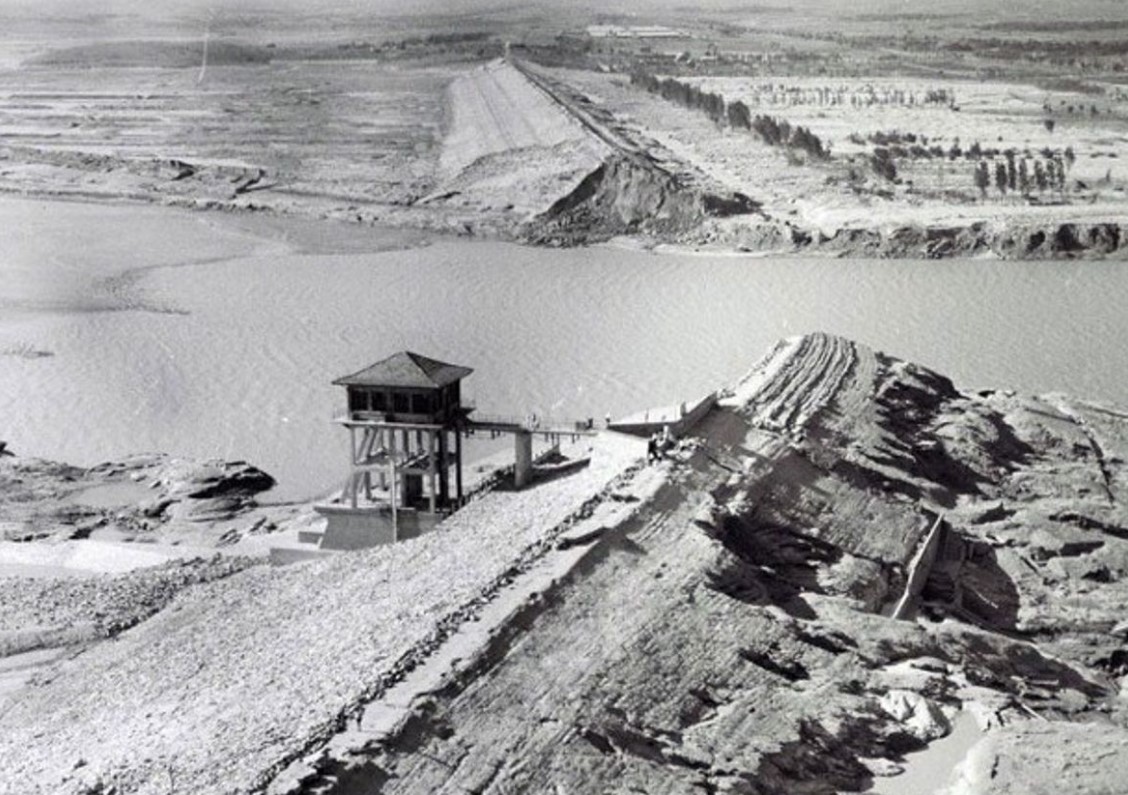 The Atlantic coast of North Carolina is protected for much of its length by a series of barrier islands. Control of these islands and the bodies of water west of them known as “sounds” was crucial for both sides. Early in the war Union forces moved to occupy the islands in order to choke off Southern-friendly shipping and control the deep-water rivers that fed the sounds. Losing the coast put most of Confederate eastern North Carolina in danger and threatened the critically important supply line on the Wilmington and Weldon Railroad.

A little more than a month later, on March 14, 1862, New Bern fell. Federal troops used the town as a base for the remainder of the war. Fort Macon, a brick structure guarding the approach to Beaufort, was surrendered by the Confederates April 25.

The loss of most of the North Carolina coast and coastal waterways was a blow both to Confederate morale and the young nation’s ability to supply its armies in the field. By late spring 1862, Union soldiers occupied the towns of Plymouth, Washington and New Bern. But aside from a few raids from those bases, the Union forces went no farther until the very end of the war when Sherman entered North Carolina in March–April 1865.

The one bright spot for the Confederates along the coast was Wilmington. Protected by strong fortifications at the mouth of the Cape Fear River, the port remained open, shipping supplies to Lee’s army in Virginia until the forts fell in early 1865.

“The Wilmington Campaign and the Battles for Fort Fisher,” by Mark A. Moore, published by Savas Publishing Company.

Pick up a free brochure highlighting northeastern North Carolina Civil War sites at many of the following locations. Or call 888-872-8562 or visit the North Carolina Northeast Partnership website (see Links) for a copy.

Graveyard of the Atlantic Museum

Markers in the parking lot of this new museum at the southern tip of the island describe Civil War events at or near the site, including the capture of Forts Hatteras and Clark in 1861, the sinking of the USS Monitor in 1862, and other wartime shipwrecks in the area. Open April–October Monday–Saturday 10 am–4 pm; closed weekends November–March.

“The Chicamacomico Races” marker describes a Confederate attempt to retake the Hatteras forts in early October 1861. The Southerners chased a Federal detachment southward from here, then were chased by Union reinforcements. Located across from the Life Saving Station Museum north of milepost 40.

“The Fanny,” a National Park Service marker, describes the capture by the Confederates of a Union supply ship, Fanny, Oct 1, 1861. The Chicamacomico Races soon followed. Located in a picnic area on the soundfront north of milepost 40.

“America’s First Attempt at Civil War Reunification” describes islanders’ attempt to reconstitute a Union-oriented government. Located on the grounds of the ECB Bank, a block west of Route 12 in the Town of Hatteras.

Most of this park is devoted to the 16th-century English settlement here, but the museum includes a very good Civil War display with maps, artifacts and some interesting stories about the February 1862 battle for the island and other war-time events in the area. $10/adult. Open daily March through December 9 am–5 pm.

The park visitor center has some information about the Civil War but the focus is the 16th-century site. Emphasis here is the Freedmen’s Colony set up after Union forces captured the island. Slaves escaping the mainland flocked to the protection of the Federal army. A formal colony was established in May 1863. Several units of Union troops were raised from the colony. A series of markers is located at the north tip of the island, just off Route 64/264. A walking trail connects the site to the Fort Raleigh visitor center.

“Gateway to the Albemarle” gives a good overview of the area and the strategic importance of Roanoke Island. Marker actually located on the mainland just west of the “old” bridge to Roanoke Island on Route 64/264.

“Burnside Expedition of 1862” describes the February 1862 Union attacks that resulted in the Union capture of the island. Marker located at the new Outer Banks Visitor Center on Route 64.

“Battle of Roanoke Island” provides an overview of the Union infantry attacks that eventually overwhelmed the Confederates, who were outnumbered 4:1. Located behind white picket fence just south of Route 64 on Route 345. Marker on east side of road, park on west side. 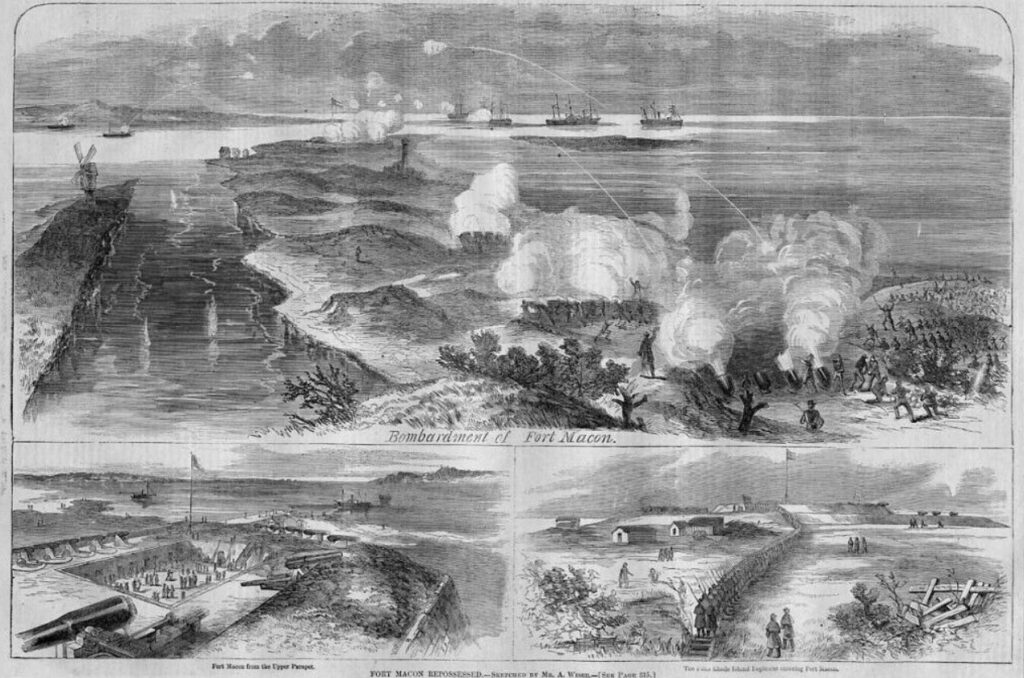 Built 1826–1834 to protect the deep-water port at Beaufort, this fort was taken by North Carolina militia in April 1861. Confederate occupation lasted a little more than a year. Fort Macon fell April 25, 1862, to a Union land-sea operation. The site remains in good shape and is maintained with its Civil War history in mind. Good exhibits located in the casemates and in the nearby Education Center. Frequent programs during the summer. Guided and self-guided tours available. Civil War Trails interpretive sign at pedestrian entrance. Fort open daily 9 am–5:30 pm; Education Center open daily 9 am–6 pm. Guided tours April 15–Oct. 15. Free.

Union signalmen stood near here directing the fire against Fort Macon in 1862. Soon after, the port became an important Union coaling station for the blockade. Tour of the historic area includes the Bell house, home to a Confederate secret agent and the Old Burying Ground, where soldiers from both sides, free blacks and slaves are buried.

Camps for Confederate troops early in the war became a Union base and headquarters in March 1862 as Northern troops advanced on Fort Macon from New Bern. Abandoned after the activity, Carolina City became part of Morehead City.

Union position here became the base of operations against Confederate-held Fort Macon, 5 miles away, March–April 1862. From here, Federal artillery was dragged with difficulty up the beach to within range of the fort.

Trails sign at the entrance to Gesthemene Cemetery, Route 24 and McCabe Road

Union outpost built in 1862 came under attack in February 1862 by Confederates supporting an effort to recapture New Bern. The Union occupants fled to the Newport Barracks.

Trails sign on Main Street at the railroad tracks in Newport

Confederate soldiers built the barracks here early in the war but were occupied by Union forces during the Fort Macon operations in 1862. A sharp fight here in early February 1864 resulted in a short-lived Confederate re-occupation of the area.

This Confederate artillery position was constructed during the fall of 1861 to guard against the increasing Union activity on the coast. It was abandoned after the capture of Roanoke Island in February 1862. This is the best-preserved earthen fortification on the North Carolina coast.

At the outbreak of the war, Wilmington was the largest city in North Carolina with a population of about 10,000. As the Union blockade choked off shipping to Southern ports, the city became critically important to the Confederate war effort. Blockade runners were able to slip into the mouth of the Cape Fear River protected by a series of forts, including the ocean-side Fort Fisher. World commerce flowing into Wilmington was used to fuel Lee’s army in Virginia via the Wilmington and Weldon Railroad with connections to Petersburg and Richmond. “Lee’s Lifeline” functioned until early 1865 when Union forces captured Fort Fisher, then marched north to occupy Wilmington. Many fine antebellum buildings, including the Bellamy Mansion, are included in a town tour. For more information, stop at the Cape Fear Museum or call 800-222-4757 for general information.

Some original Confederate defenses remain from the Southern defensive line that slowed the Union advance toward Wilmington here Feb 20–21, 1865, after the fall of Fort Fisher.

Confederate fort built between the ocean and the Cape Fear River, guarding the approach to Wilmington. Only about 10 percent of the original fort remains, but what is left is impressive. The visitor center describes the importance of the fort and the battles that eventually resulted in the Union capture Jan. 15, 1865.

The visitor center offers a bookshop, audio-visual program, and newly refurbished exhibits tracing the history of the campaign and battles. The centerpiece of the exhibits is a large fiber-optic battle map featuring a three dimensional model of Fort Fisher, thousands of moving lights, and dramatic narration and sound effects illustrating the final bloody hours of Fort Fisher.

Built by Confederates in 1863, Fort Holmes helped guard the ocean inlets to the Cape Fear River. Most of the fort has been lost to erosion, but parts can be seen today. A walkway a short distance from the lighthouse and the Smith Island History Museum connects the existing features. Interpretive signs tell the story.The island fortifications were abandoned in 1865 after the fall of Fort Fisher. 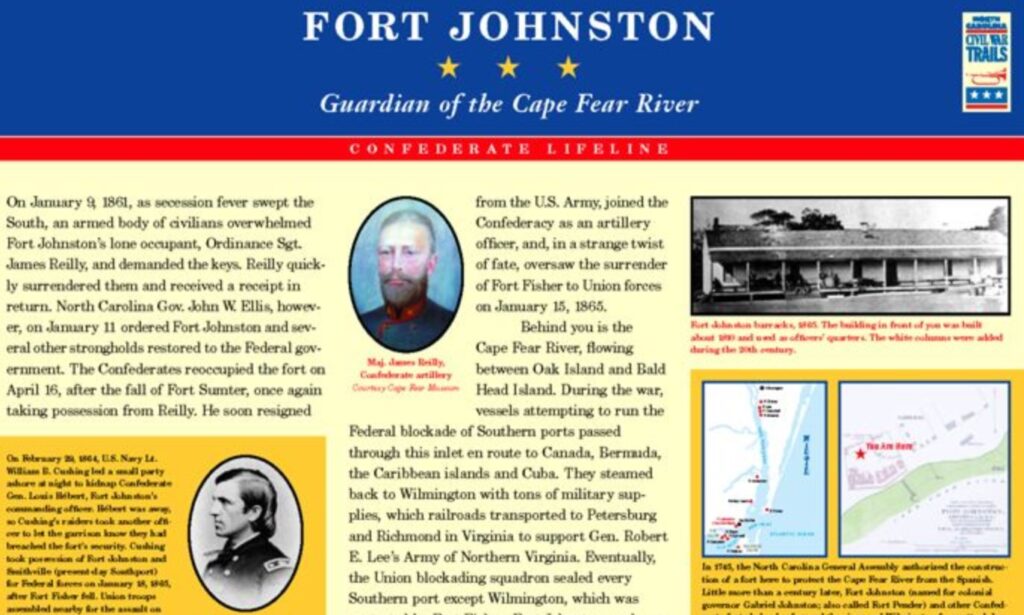 Confederates took possession of this fort guarding the Cape Fear River in April 1861 following the fall of Fort Sumter in Charleston SC. Blockade runners slipped safely under its guns to Wilmington throughout the war.

Large fort commanding the Cape Fear River on the west side. Built by Confederates in 1861 on the site of an 18th-century town (Brunswick). The fort fell to Union forces in February 1865 as Federal troops marched toward Wilmington after the fall of Fort Fisher. The state historic site interprets both eras at the museum/visitor center. Self-guided walking tours of both sites available. Open Tuesday-Saturday 10 am–5 pm. Free. 910-371-6613. Civil War Trails sign on site.

Suggestion: Take a Cape Fear River loop from Wilmington. Travel south from Wilmington on Route 421 to Fort Fisher, then take the automobile ferry ($5) across the river to Southport then north on the west side of the river on Route 133 to Fort Anderson, then back to Wilmington. This tour will take most of a day with lunch (at Southport?), tours of both forts and maybe even a stop at the beach.

This was a Confederate recruiting station very early in the war but the area was soon occupied by Union troops and used as a staging area for raids inland.

Union control of the area by 1863 restricted the movement of regular commerce between merchants and farmers here and their markets in southeast Virginia. The situation was strained by active smuggling and guerilla activity against the Federal occupation. The tension was especially felt at Moyock, which was the “gateway” to the markets at Norfolk.

Salt was an important commodity during the war. It was essential for the preservation of meat and vital for both armies. The area had hosted a salt works here since the War of 1812. One of the objectives of the Federal occupation here was to end the salt-making capacity in the area.

Confederates held this busy commercial shipyard and milling center early in the war, and it became a frequent target for Union forays. In June 1862 Federal forces captured and burned a large schooner with timber destined for a Confederate shipyard; then, in December 1863, Federals scattered “guerrillas” here, burning their camp and houses.

On June 10, 1863, Confederate prisoners, heading from Fort Monroe to captivity in the North on the steamer Maple Leaf, overpowered their guards and escaped to the North Carolina coast. Citizens in the area concealed the escapees from angry Federal patrols. Most of the Confederates eventually made their way to Richmond.

Opened just before the war in 1859, this canal connected the Currituck Sound area with Norfolk, Va. Confederates used this route both ways to get supplies to Norfolk and to ship materials for the construction of the fortifications at Hatteras. Following the Federal occupation of the North Carolina and Virginia coast in early 1862, Union shipping used the waterway.

This body of water, sheltered from the Atlantic Ocean by the Outer Banks, was an important avenue for commerce between in North Carolina and Virginia. Confederate control of this and other northern North Carolina sounds evaporated after the fall of Roanoke Island in early 1862. Union forces then used the area to strengthen the blockade.